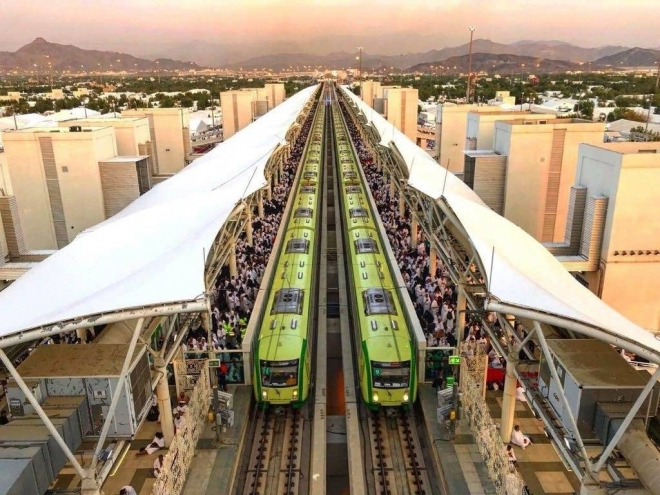 Among the projects that will come into service this year is the Pedestrian Bridge project opposite King Abdullah Road in Mina, a project for extending Road 206 and linking it with Road 204, setting up three slopes in Mina, construction of multistory residential and administrative buildings for Al-Mashaer Train operators, a project for preparing the mountainous site east of Mina, setting up of the infrastructure project around the Al-Mashaer Train stations in Muzdalifah and Arafat, project for assembling and operating 2400 mobile readymade restroom units in Mina.

Spokesman of MRDA, Jalal Bin Abduljaleel Kaaki, said that this plan was prepared under the supervision of Prince Khaled Al-Faisal and direct follow up by Prince Badr Bin Sultan, deputy emir of Makkah Province.

The objective is to make these projects conform with the new ones carried out by the MRDA this year in the holy sites, apart from those carried out in the past. The MRDA supervizes the mechanism for operation of these projects such that they provide an integrated service to the pilgrims.

Kaaki said that the authority has mobilized all its administrative and technical cadres totaling 14,000 employees along with 400 machines for carrying out the operation plan. A special mechanism was laid down to carry out the plan on the ground and to ensure that all the projects are ready to provide their services to the pilgrims.

This year’s operation plan comprises supervision of the pilgrims’ services projects in the holy sites. Foremost among these is supervising operation of the Al-Mashaer Train, which during the grouping plan is expected to transport over 360,000 pilgrims from Mina to Arafat and then during the Nafrah from Arafat back to Mina.

Meanwhile, the total number of pilgrims who will be transported by the Al-Mashaer Train during the Tashreeq Days will exceed two million. As to the Jamarat Complex, the operation plan focuses on the complex’s preparations for receiving pilgrims during the lapidation days (Stoning of the Jamarat). Aside from this, there is maintenance and operation of the projects linked with it and that leads to the Jamarat Complex.

The plan also includes ensuring that the restrooms in the holy sites are ready for use. They are in the form of 484 complexes containing over 30,000 toilets ready for use by the pilgrims.

There is also the project for the treatment of leftovers from slaughtering of sacrificial animals and converting them to organic fertilizer.

The project, which is the first of its kind in the world, aims to protect the environment from foul odors, bacteria and groundwater pollution due to burial of leftovers from slaughtered animals. The plant has a storage capacity of 10,000 ton while 120 ton of waste is treated daily.