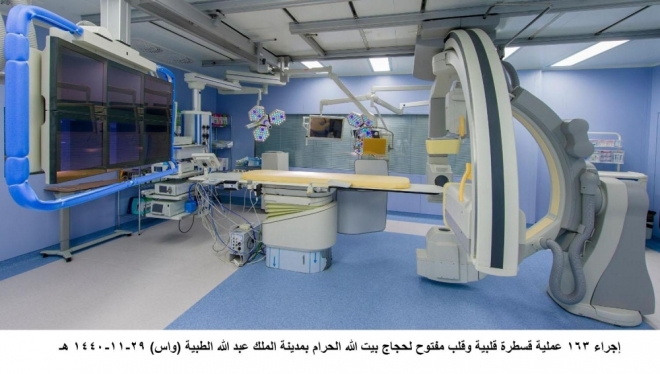 RIYADH – The Ministry of Health said its hospitals in Makkah and Madinah have so far conducted as many as 107 open-heart operations on pilgrims during this Haj season, 683 dialysis procedures, 35 binocular operations and 219 general surgeries.

The report said that 1,024 pilgrims checked in with hospitals, with four cases of birth, and 16 heat exhaustion cases were registered, Saudi Press Agency (SPA) reported on Wednesday.

Meanwhile in a related development, King Abdullah Medical City (KAMC) in Makkah has conducted more than 163 operations, including 160 cardiac catheterizations and 3 open-heart operations for pilgrims since the beginning of the month of Dhul Qa'dah this year until now, Saudi Press Agency said on Thursday.

The executive management participating in heart health at the Cardiac Center explained that the Center raised its mechanical and human capacity to serve the patients among pilgrims as part of the strategic plans of KAMC in harnessing specialized capabilities around the clock to provide the best medical services to patients through an advanced treatment system and supervisory medical and technical workforce with a high level of scientific and technical qualifications. — SPA


⇐ Previous:
Honor to serve: Saudi boy scouts are always there to help during Hajj
Next: ⇒
Security forces gear up for successful Haj mission