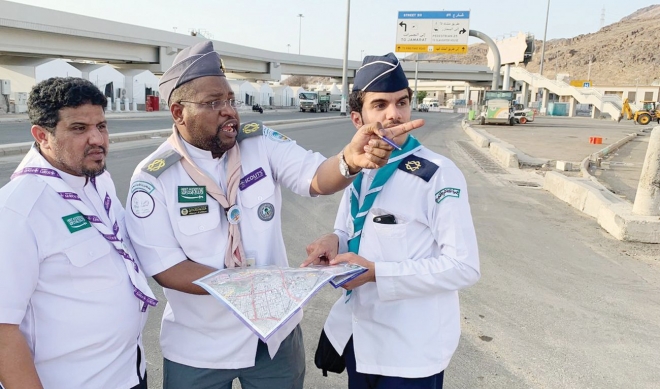 JEDDAH: Each Hajj season more than 4,000 Saudi boy scouts volunteer for service, as up to 2 million pilgrims gather to perform Hajj.

Saudi scouts are always there at the camps of Mina and Arafat to help those in need and guide them if they need help.

The main duty of each Saudi scout is to assist in leading people to the correct sites, especially older people who find it hard to follow their groups or are not able to cope with the new mapping technologies.

Scouts can communicate with pilgrims in numerous languages including Arabic, English and Urdu.

Pioneer Scout Mubarak Al-Dosari talked to Arab News about the number of scouts assisting during Hajj 2019 in Makkah and Madinah: “This year we have 4,500 Saudi boy scouts and team leaders, as well as about 1,500 members working in the ports and holy cities who were chosen by the Ministry of Education and are supervised by the Saudi Arabian Boy Scouts Association (SABSA) to assist nearly 400.000 pilgrims.’’

Waleed Felemban, one of the pioneer scouts in Saudi Arabia, who has been leading new scouts with SABSA for more than 30 years, is the commander of the Committee on Cartographic Guidance in Camps.

“SABSA qualifies its employees to provide better service to the pilgrims, and help in smoothing the process of guidance,” said Felemban.

“To train the beginners, we introduce them to the important sites of the Two Holy Cities, and teach them how to find all the streets of Mina and Arafat. The team leaders’ mission is to keep boy scouts updated on the changes and developments,” Felemban said.

The groups come from the first day of Dul Hijjah and train for six days, where they perform a complete survey of the Mina and Arafat camps. They ensure that all civil institutions and Tawafa offices have set up their positions so that they are mapped.

Felemban talked about what the scouts do and how they are being prepared to receive pilgrims.

“Boy scouts and rover scouts make field surveys and record the sites of camps and field service offices, and they register the names and nationalities of the pilgrims to identify them through wrist bracelets of different colors.” During these six days, two surveys are conducted every morning and evening, in which all the changes are recorded, including all the services provided by the Saudi Arabian government, such as police stations, health centers, the Red Crescent, and bus stops.

Waleed Felemban explained the strategy they follow in making Hajj maps, how these are created from scratch and updated.

“The committee starts working from the middle of Shawwal, collecting data through government agencies, including any changes in street numbers or new bridges — including housing.”

“These are put on maps and modified by Google Earth, assisted by the King Abdul Aziz City for Science and Technology (KACST). Images are processed, and features and services are presented in a simplified form that everyone can read through the AutoCAD program.”

More than 1 million maps are printed in different sizes and distributed to all Tawafa offices and charity guidance centers to identify sites.

These maps can also be downloaded from the SABSA website (www.scouts.org.sa), which determines the direction and location desired by the user.