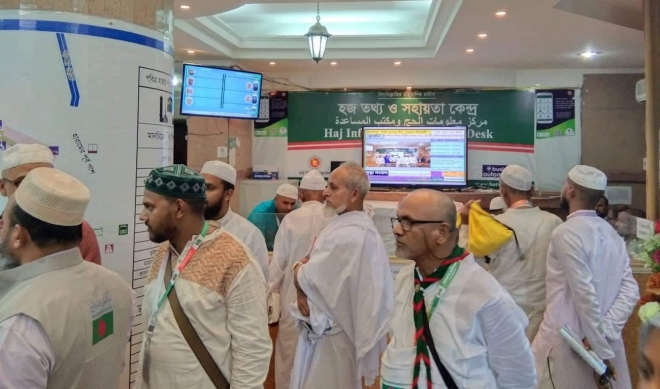 About 125,000 Bangladeshi pilgrims have arrived in Saudi Arabia to perform Hajj this year following a round-the-clock operation by Bangladesh’s Hajj mission in Dhaka.

“A 40-member team from the Religious Affairs Ministry has been added to the regular Hajj staffers to help the pilgrims heading to Makkah,” Saiful Islam, director of the Hajj office in Dhaka, told

“Although there were some visa-related issues, steps were taken to solve the problems. All willing Hajj pilgrims are now entrusted with visas,” Islam said.

The pilgrimage is due to be completed on Aug. 10.

“Wonderful management — there is no hassle for the pilgrims,” Shahdat Hossain Taslim, the association’s secretary general, said.

“In Makkah and Madinah, we have launched two clinics where 127 doctors and nurses have been deployed to treat Bangladeshi pilgrims. An 18-member emergency response team will also look after the well-being of pilgrims,” he said.

Taslim said that Saudi Hajj officials were focusing on logistical issues to help the pilgrims during their stay at Mina, Arafat and Muzdalifah.

Pilgrims sometimes faced difficulties due to lack of sufficient transport, he said.

“This problem can be easily solved if a few more vehicles are added.”

Arif Murshed Khan, from Cumilla, plans to perform Hajj with his wife and three maternal aunts.

“All the pilgrims wear a wristband and a PID (personal information detail) on their chest, which helps them to meet any emergency.”

Another pilgrim, Mansura Begum, said: “I have been suffering from health problems for the past couple of days. I was worried about the availability of specialized doctors, but here at the Bangladeshi clinic I met dedicated female doctors.”

Biman Bangladesh, the official carrier of the country, operated its last flight to Saudi Arabia carrying pilgrims on Monday, while the Saudi airline Saudia is scheduled to carry the last batch of pilgrims on Tuesday morning.

The two airlines began month-long Hajj flights on July 4. For the first time this year, half the Bangladeshi pilgrims have been able to complete pre-immigration formalities at Dhaka airport in line with the Saudi government’s Makkah initiative.

Pilgrims will begin returning home on Aug. 17 and post-Hajj flights will continue till Sept. 15.