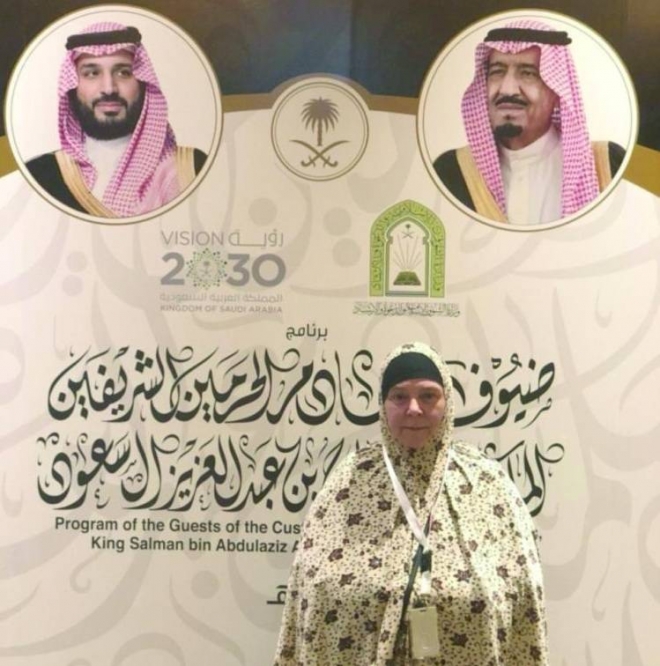 MAKKAH — Tracy, a female pilgrim from New Zealand, has arrived in Makkah to perform Haj this year as a guest of the program of the Custodian of the Two Holy Mosques King Salman in which he invites a number of Muslims from various parts of the world to perform Haj or Umrah at his own personal expense.

She is one of 6,300 pilgrims from 73 countries who are personal guests of the King.

She has newly embraced Islam and said the happiest day in her life was when she first set eyes on the Holy Kaaba.

"I am living in the holy sites these days which are the most sacred places on earth. I am living in my best days. There are no distinctions between white and black or Arab and non-Arab people," she said.

Tracy said it was the strong bonds that she observed among Muslim families in New Zealand which drove her to embrace Islam.

She said she has a Muslim woman friend who explained Islam to her and told her much about this great religion.

"My visit to this friend at her home was a turning point in my life. I saw with my own eyes the strong cohesion of this friend and her family. This made me think deeply about Islam which led me to embrace the religion at the end of the day," she said.

Tracy said her woman friend took her to a nearby mosque where she declared her conversion to Islam.

"Good sometimes comes out of the womb of evil. The tragedy of the Christchurch mosque made many Kiwis embrace Islam," she said.

She said people in her country are in need of scholars and preachers to explain to them the noble principles of Islam including tolerance and justice.