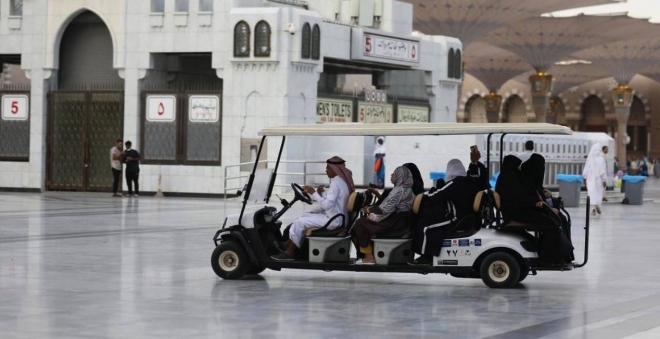 MAKKAH — Two days before the grand stand on Mount Arafat, marking the climax of the pilgrimage, as many as 1,838,339 pilgrims from outside have arrived in the Kingdom with an increase of six percent compared to the same period last year.

The Directorate General of Passports (Jawazat) has announced the completion of the arrival of the pilgrims from outside. They included a total of 6,300 pilgrims from 73 countries who were invited by Custodian of the Two Holy Mosques King Salman to be his guests and perform Haj.

Director general of the Jawazat, Maj. Gen. Sulaiman Al-Yahya revealed that about 300 cases of forgery in the travel documents and the Haj visas were discovered and their holders were sent back to their respective countries.

The Haj security forces, on the other hand, announced that they have uncovered and closed down some 164 fake Haj offices and 15,388 violators including 8,478 expatriates while attempting to enter Makkah and the holy sites without Haj permits.

They said 163,212 vehicles without official licenses to enter the holy sites and 368,336 expatriates who are not residents of the Makkah region were returned back to where they came from.

The road security forces said there were 62 traffic accidents in which five people have died and nine others injured in addition to 838 other traffic violations.

As many as 5,909 digital cameras have been installed at the six entry points to Makkah, the holy sites and the plazas of the Grand Mosque to manage the masses.

As many as 315 officers and privates are working around the clock at the Command and control Center to follow up the security situation via these cameras.

Meanwhile the first batch of 295 Yemeni pilgrims who are kins of the martyrs of the Decisive Storm and the Restoration of Hope military operations against the Houthis arrived in Makkah within the king's program for the Haj and Umrah.

About 1,000 Palestinian pilgrims who are guests of the king have also arrived in Makkah and were welcomed by officials from the Ministry of Islamic Affairs, Call and Guidance which is supervising the program.

The Ministry of Health has, for the second year, set up a mobile field hospital to the north of the Namirah mosque in Arafat to provide emergency medical services to the pilgrims.

The hospital has 11 beds consisting of two beds at the intensive care unit, four beds for confinement and five chairs for medical care in addition to other various medical equipment.