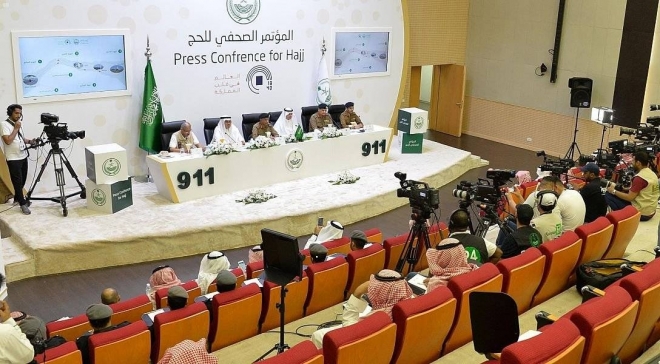 MINA — The spokesman of the Ministry of Interior Maj. Gen. Mansour Al-Turki said that the first phase of moving hundreds of thousands of pilgrims in Mina has been completed, Saudi Press Agency (SPA) quoted him as saying on Friday.

He added that the transportation operations have been running smoothly. The operation to take the pilgrims to the Holy Site of Arafat will begin at the dawn of Saturday and from Arafat pilgrims will be moved to Muzdalifah to stay there overnight and return again to Mina next day.

For his part, the official spokesman of the Ministry of Hajj and Umrah Hatem Qadhi lauded the successful transportation of pilgrims to Mina. He said the vast majority of pilgrims have arrived in Mina and there is only 10 percent of the pilgrims on their way to Mina to spend the day of Tarwiyah there. He also said that the rate of bus engine failure was very low (less than 0.5 percent) compared with last year.

For his part, the official spokesman of the Hajj Security Forces Command Sami Bin Muhammad Al-Shwairikh said that the second phase of the crowd management plans and the related traffic plans were put in practice from the early hours of the day, stressing everything is going as planned.

He also said that 256 fake offices were raided in various regions of the Kingdom, and those responsible were referred to the official authorities for legal action against them. Also, 16,903 persons who intended to perform Haj were turned back because they did not have valid Haj permits, and 218,696 vehicles violating Haj regulations and instructions were not allowed to enter Makkah.

For his part, the official spokesman of the Ministry of Health Dr. Muhammad Bin Khalid Al-Abdalali said that the general health situation of pilgrims this year is reassuring and no epidemic cases have been recorded.

He pointed out that patient pilgrims who are unable to move normally will be moved to the holy sites via special medical vehicles and ambulances so that they are able to perform Haj rituals.

He also said that there is a service being provided in cooperation with the National Information Center to help identify the deceased or unknown persons. This service also provides relevant information to a health practitioner so that he or she can provide the best medical services to pilgrims. — SPA