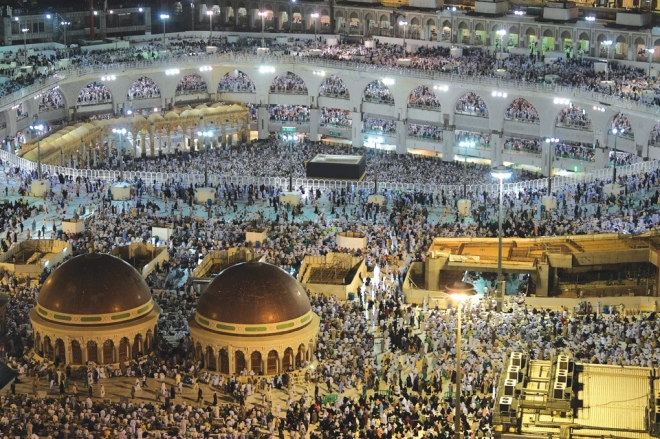 RIYADH: Until relatively recently, Hajj was very difficult for most pilgrims, who in some cases would spend months making the pilgrimage to Makkah. It meant that many families faced emotional farewells when they left their families behind for such a long time.

Even those who lived much closer to the holy sites would often be treated to elaborate going-away celebrations.

Manal Al-Harbi, from Madinah, first performed Hajj 40 years ago when she was only 15 years old. In those days, local families had their own special way of saying goodbye to pilgrims and wishing them well on their journey.

“Once the Hajjis were ready to leave, the families usually gathered around them carrying baskets of candy and money and tossed it at them while cheering and praying for their safe return,” she said. “They do this, usually, before Hajjis leave and after they return.

“I will never forget that moment when my family said goodbye to me. It was very emotional.”

Before modern facilities were built in Makkah, availability of tents and access to toilets were limited for pilgrims who came to the holy site from around the world to perform Hajj. (AFP file photo)

In the old days, many pilgrims from around the world would prepare for Hajj for years in advance, saving money for the complicated and expensive transportation that was available back then.

Zahid Hasan, an Indian national who used to work in reception at a hotel in Makkah, journeyed from his home country to Saudi Arabia in the early 1980s to perform Hajj.

“Al-Noor Jahan and Akbari were the only ships that took pilgrims from Mumbai to Jeddah. The total amount spent during the Hajj season by Hajjis from India might have taken five months to save. Now it takes one and a half months maximum.

“Ships were the most common mode of transport from India to Saudi Arabia. There were flights available but only a small number of pilgrims used to travel by plane.”

Pilgrims should avoid crowding and choose the best time to move or perform rituals.

Those with colds and flu should drink plenty of water, fluids and rest as much as possible.

People should not consume any antibiotics without consulting a doctor.

Pilgrims with heart disease should take enough medication and store it safely and properly. They should also carry a medical card.

Similar are the Hajj memories of Dr. Sayed Inseram Ali, a Pakistani national who lived and worked in Madinah for almost 50 years. “The sea voyage was slow because some ships had to stop in a number of countries along the way,” he said.

"For instance, they would go from Pakistan to India to Egypt and, finally, to Jeddah. The total time for the Hajj trip might be four months, where now it’s only 40 days.”

Ships of this kind stopped sailing in 1995. The Akbari was the last one to carry pilgrims to Hajj. However, now that passenger ships are more modern and comfortable, the government is reintroducing sea voyages for pilgrims.

In comparison with pilgrims from other countries, Al-Harbi had a much smoother Hajj experience. Because she lived in Madinah, her preparation for the pilgrimage took only three days.

“My family and I immediately started to pack once we decided to go to Hajj,” she said. “I remember there wasn’t any paperwork to complete because we lived in Saudi Arabia. We took our tent and food with us.

“The roads were rugged and unpaved at that time, and since it was the busy Hajj season the trip by car from Madinah to Makkah took us seven hours, compared with now when it only takes three.”

Al-Shareefa Wadeeah bint Abdullah, an 80-year-old native of Taif, has vivid memories of Hajj she performed 50 years ago.

Dr. Sayed Inseram Ali, a Pakistani national who lived and worked in Madinah for almost 50 years, says the sea voyage was slow because some ships had to stop in a number of countries along the way. (Supplied photo)

“We packed our bags, put on our Ahram and headed off to Makkah to perform Hajj,” she said. “In the past there weren’t really any hamlat (Hajj missions) to register with. Our trucks would be filled with food and tents, and we would camp at Muzdalifa or Mina.

“It was a simple affair, as usually the whole family would go, even little children, but it was tiring. Nowadays it’s much more organized.”

In those days pilgrims had to arrange everything by themselves, with the help of muallims, who were like sponsors for hajjis.

Said Ali: “Once pilgrims arrived, in Jeddah for example, muallims divided them into groups, each of which had a muallim in charge of it. They were also responsible for accommodation.”

Ali came to live in Saudi Arabia in 1970, when was appointed by the ministry of health to work in Madinah. He performed Hajj the following year.

“Hajj took place during the winter back then, and a group of us traveled in a minibus,” he said. “Tents were provided and my wife used to cook for the group. A tent back then cost only 50-70 riyals.

“In Arafat, the muallims used to provide different kinds of Saudi food and water. During the 1970s, access to toilets was limited, as was the availability of tents. Now there are tents for everyone. You can also now get plenty of food and snacks.”

For her part, Al-Harbi said: “We had to walk for long distances between the mashaer (pilgrimage stopping points) to complete our Hajj.

"However, the atmosphere was fun and joyful and because we went during the winter season it made the trip a lot easier as the weather was nice and we didn’t suffer from the heat.

"Still, I remember I was complaining a lot but probably because I was too young to go to Hajj.”

Pilgrims also had to cook for themselves, before this was banned by the government in the 1990s.

They are not allowed to make open fires or bring gas cylinders or portable gas stoves with them to cook, and food is provided for everyone.

“I remember we took the whole kitchen with us: rice, bread, coffee and tea, candies, meat, vegetables and fruit. Everything that was needed keep our stomachs full for five days,” said Al-Harbi.

She said that every hajji experiences both tough moments and happy times during their journey.

“I remember hating the road trip,” she said. “Because I was the youngest in my family, I had to sit in the back seat of the car, surrounded by the luggage and food.”

Al-Harbi also remembers some difficulties in Mina: “It was tiring for us. We stayed there for three days and I was sleeping in the car and it wasn’t comfortable at all.

“There were also happy moments, too. We used to play games and my father would tell us a lot of stories and jokes to make the time pass faster.”

Hasan said he had a satisfying Hajj experience, too, and that he liked the fact that there were fewer pilgrims in those days.

“Performing Hajj was easy,” he said. “There wasn’t a huge rush like today; the number of pilgrims was not so high back then.”

In the 1970s, said Ali, “the number of pilgrims was 700,000; today there are nearly three million and they are all moving in the same direction, thanks to the Saudi government. This would never be pulled off in any other country.”

Hasan too says he is thankful for the efforts of the Saudi government in organizing trips and helping the pilgrims complete what is a very important journey in their lives.

“I am impressed by and praise the expansions of the holy mosques in Makkah and Madinah,” he said.