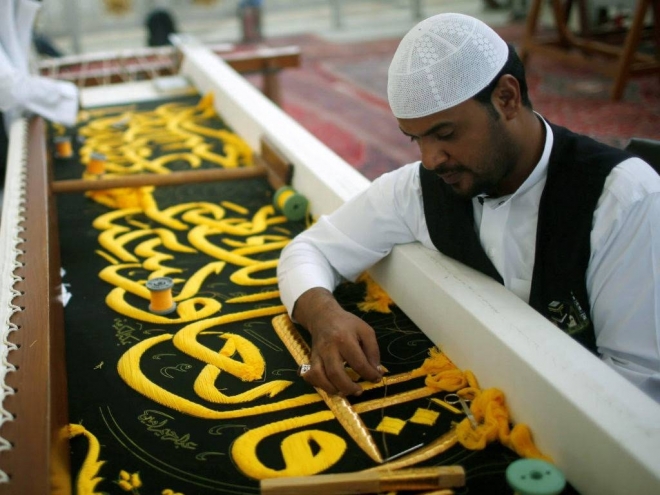 MAKKAH — The Kaaba (House of God) was early Saturday dressed in its new kiswa as is the custom of the Presidency of the Affairs of the Two Holy Mosques every year.

About 160 Saudi technicians dressed the Kaaba in its new kiswa which was embroidered at King Abdul Aziz Kiswa Complex in Makkah.

The old dress was taken off and the new kiswa was put on after Fajr prayers. Emir of Makkah Prince Khaled Al-Faisal handed over the new kiswa to the Custodian of the Kaaba last week.

The residents of Makkah, especially the women, take advantage of the Grand Mosque being empty because the pilgrims are in Arafat to come to the Haram to witness the change of the kiswa and do their Umrah.

The Kaaba is dressed in its new kiswa once every year on the 9th of Dhul Hijja which is Arafat day.

The kiswa is made out of five parts that are prepared separately. For each of the 4 sides of the Kaaba, a part of the kiswa is custom-made depending on that side’s width. Once completed, they are sewn together. The door’s section is the kiswa’s fifth. Given how heavy the door’s drapes are, they are directly hung on the Kaaba’s walls.

The kiswa is made of 14 meters of genuine silk that is dyed black. On the top is a 95cm-wide belt that comprises of 16 pieces of Islamic embroideries. Selected verses of the Quran are written under the belt, and also cover every side of the Kaaba. These embroideries are carefully sewn using gold-plated silver thread.

A total of 200 Saudi employees work tirelessly to complete the numerous stages of manufacturing of the kiswa. These stages mainly include: the embroidery of the Kaaba’s belt, weaving the fabric by hand and machine, printing, draping, and coloring.


⇐ Previous:
Pilgrims gather on Mount Arafat at the climax of their Haj
Next: ⇒
Kingdom imports more than four million sheep in seven months