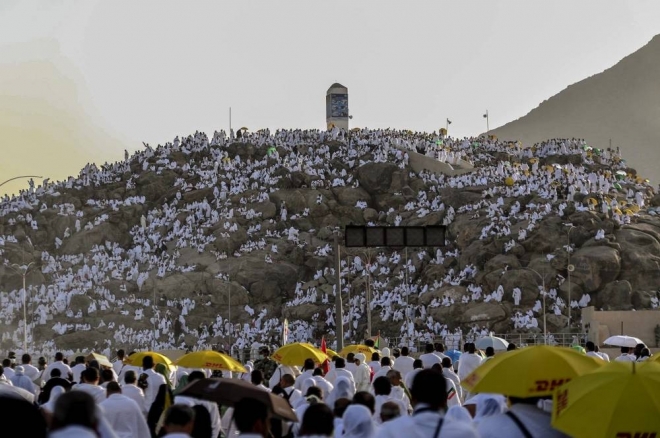 ARAFAT — More than two million pilgrims stood on Mount Arafat on Saturday at the climax of their Haj after spending the night in Mina.

The pilgrims started arriving in Arafat early morning using the Masher train and the air-conditioned busses. Some of them opted to cross the distance of nine km on foot.

The stand on Arafat will continue until sunset after which the pilgrims will proceed to Muzdalifah where they will pray Maghreb and Isha together and stay there until after midnight when they will go back to Mina for the stoning of the Jamrat Al-Aqaba (the big Satan), slaughter the Hadi, Adahi and sacrificial animals, shave off and change into plain clothes.

From the Jamrat area, a large number of the pilgrims will proceed to the Grand Mosque to do Tawaf Al-Ifada.

The pilgrims will remain in Mina on Sunday and Monday. On Tuesday those who are in a hurry will go back to Makkah to complete their Haj rites while others will stay in Mina a day more until Wednesday.

According to Emir of Makkah Prince Khaled Al-Faisal, who is the chairman of the Central Haj Committee (CHC), 2,091,471 pilgrims are doing the Haj this year, including 1,855,407, who came from outside and 200,360 from inside the Kingdom.

He, however, warned that these figures may change once the final statistics were available.

The prince told a press conference in Mina on Friday that more than 350,000 military and civilian Saudi citizens, including more than 4,000 volunteers, were serving the pilgrims to enable them do their Haj rites in ease, peace and comfort.

"We never take the trouble to respond to the allegations of the enemies. Our only reply to them is the serious work we do and the resounding success of the Haj," he said.

According to the figures released during the press conference, there were 350,000 tents in Mina which could be increased by additional tents to accommodate more than 120,000 pilgrims.

The press conference was told that 256 fake Haj offices were discovered all over the Kingdom, 16,903 pilgrims were sent back because they did not have Haj permits, 218,696 cars returned back because they had no licenses to enter into the holy sites, 819 expatriates were nabbed for transporting illegal pilgrims and more than 20,000 pilgrims were provided with emergency services.

The Ministry of Hajj and Umrah said about 49 transport companies have provided 18,500 buses to transport the pilgrims.