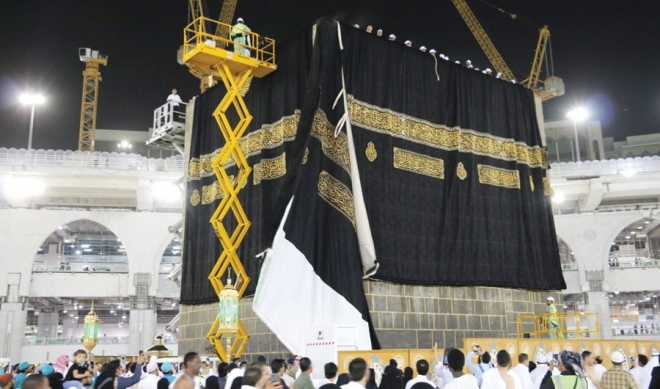 MAKKAH: The ceremony to replace the old Kiswa (cover) of the holy Kaaba was held on Saturday, involving 160 technicians and craftsmen. Every year, the black silk that covers the Kaaba is replaced on the ninth day of the Islamic month of Dhul Hijjah.

The ceremony was held under the supervision of Sheikh Abdulrahman Al-Sudais, the chief of the General Presidency for the Affairs of the Two Holy Mosques.

The change occurs when pilgrims head to Mount Arafat to witness a key ritual during the pilgrimage.

Ahmed bin Mohammed Al-Mansouri, deputy head of the General Presidency for the Affairs of the Two Holy Mosques and director general of the King Abdul Aziz Complex for the Kaaba, said that the holy Kaaba was donned with a new Kiswa, constituted of four sides and a sitar (curtain) for the door.

The Kiswa’s fabric is produced in the form of large pieces, each 10 centimeters wide and 14 meters long.

Each of the four parts of the Kiswa were separately raised, in preparation for stretching it on the old side. The side was consolidated from above by tying it and dropping at the other end after the old side’s ropes were untied by moving the new side up and down.

Then, the old side was removed from the bottom and the new side remained, and the process was repeated four times for each section until the operation was complete and the belt was sewn in a line, straight with the four sides.

• Every year, the old black silk cloth that covers the Kaaba is removed and a new one is draped on the ninth day of the Islamic month of Dhul Hijjah.

• The move occurs when pilgrims head to Mount Arafat to witness a key ritual during pilgrimage. The older Kiswa is removed and replaced with a new one.

Al-Mansouri said: “The process began from the side of the Hateem (a semi-circular wall opposite the northwest wall of the Kaaba), because Al-Mizab (a rainwater spout made of gold) requires a special opening at the top. After consolidating all the sides, the corners were fixed by sewing them from the top of the cloth to the bottom.

The cover includes a curtain of Kaaba’s door. Called a burqa, or veil, the curtain is made of silk, and is six-and-a-half-meters high and three-and-a-half-meters wide, with Qur’anic verses decorated with Islamic motifs that are embossed and covered with gold-plated silver thread. This special thread comes from Germany.

Pilgrims can connect to the high-speed network via Wi-Fi at a number of locations at the holy sites.

The Kiswa consists of five pieces of cloth, each covering the Kaaba on four sides and the fifth is the burqa. All these pieces are connected to each other.

Al-Mansouri said the Kiswa is embellished with inscriptions woven in black fabric threads, holding specific verses from the Holy Qur’an.

The cost of the Kiswa is approximately SR22 million ($5.8 million).

The Kiswa factory was built when King Abdul Aziz Al-Saud established a separate house for the manufacturing of the Kaaba cloth in 1927.

The factory was renovated and modernized in 1976 and equipped with latest machines for preparing the fabric, though it retained the method of manual production because of its high artistic value.

The factory continues to keep pace with the development, and preserve the ancient handmade heritage to produce the best Kiswa each year.

About 200 craftsmen and administrators, all trained and qualified Saudi nationals, are engaged in producing the majestic black cover at the King Abdul Aziz Complex for Holy Kaaba Kiswa. The process includes dyeing, manual and automatic weaving, printing and manufacturing the Hizam.

The complex includes the world’s biggest weaving machine, which is about 16 meters long.

Al-Sudais delivered a speech, praising the leadership of Saudi Arabia for putting the service of the holy Kaaba, the holy sites and the pilgrims at the top of its priorities.

He said that the Kingdom’s drive to serve the Two Holy Mosques began in the era of late King Abdul Aziz, and continued with his sons’ determination to serve visitors and pilgrims, which has endured into the prosperous era of King Salman.

He asked God to protect and preserve King Salman, the crown prince, the Makkah governor, the head of the Hajj central committee and the Madinah governor for their great efforts in the service of pilgrims.


⇐ Previous:
Meet the parents taking their children to Hajj
Next: ⇒
How Saudi Arabia plans to meet the water needs of holy sites