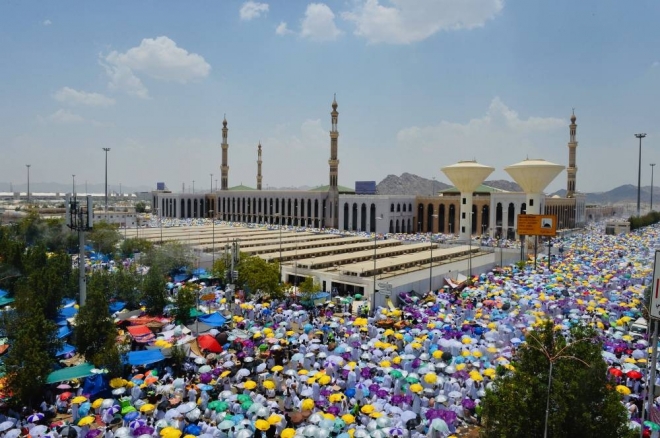 ARAFAT — Pilgrims flocked to Namirah Mosque at the Holy Site of Arafat on Saturday to perform Dhuhr and Asr prayers and listen to the Arafah sermon, Saudi Press Agency reported.

The 110,000 square-meter Namirah Mosque and the 8,000-square-meter adjacent courtyards were brimming with pilgrims.

The prayers were attended by Prince Khaled Al-Faisal, emir of Makkah, adviser to Custodian of the Two Holy Mosques and Chairman of the Central Haj Committee; the Grand Mufti of the Kingdom of Saudi Arabia and President of the Council of Senior Scholars and General Presidency of Scholarly Research and Ifta Sheikh Abdulaziz Bin Abdullah Al-Asheikh; and Minister of Islamic Affairs, Call and Guidance Sheikh Dr. Abdullatif Bin Abdulaziz Al-Asheikh.

Member of the Council of Senior Scholars Sheikh Muhammad Bin Hassan Al-Asheikh delivered the Arafah sermon before leading the pilgrims in combined-shortened Dhuhr and Asr prayers.

In his Arafah sermon, Sheikh Muhammad Al-Asheikh focused on the concept of mercy and compassion (Rahma), drawing his points from verses of the Holy Qur’an and the sayings (Hadith) of the Prophet (peace be upon him).

He called on all Muslims to be conscious of Allah Almighty (i.e., fear Allah Almighty) as in this is their success in this life and in the Hereafter, stressing the importance of abiding by Monotheism (Tawheed). He asserted that Tawheed is worshiping none but Allah Almighty, as He created mankind and the jinn to worship Him alone.

He said that it is with the mercy of Allah Almighty that the bounties descend. Among the aspects of Allah’s mercy in the universe is that He sends rain to revive the land after a dry spell, and He created the day and night, so that human beings work hard to earn a living during the day and rest during the night.

Sheikh Muhammad Al-Asheikh highlighted in his Arafah sermon the Kingdom's great efforts in expansion projects in the Two Holy Mosques, the gigantic projects in the Holy Sites for performing rituals easily and comfortably and arranging the infrastructure there. The kings of this country have been very keen on the welfare of the Two Holy Mosques, pilgrims and Umrah performers, starting from the reign of late King Abdulaziz, then the late Kings Saud, Faisal, Khalid, Fahd and Abdullah, and what we are witnessing in the present era of great works in these Holy Sites. He prayed to Allah Almighty to make the efforts of the Custodian of the Two Holy Mosques King Salman and Crown Prince Muhammad Bin Salman a success.

Al-Asheikh lauded the great efforts of all the security agencies, security men and all other agencies and volunteers in treating the pilgrims kindly, which he described as one of the aspects of mercy during the Haj.

Sheikh Muhammad Al-Asheikh prayed to Allah Almighty to accept the pilgrims' Haj, facilitate their journeys and make their return journeys to their respective countries safe.