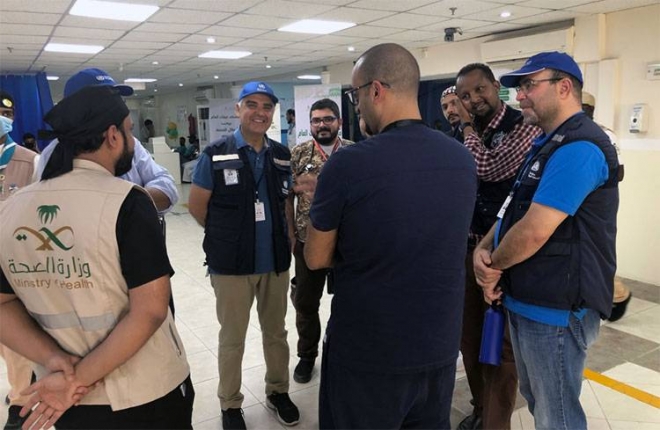 MINA — The World Health Organization (WHO) congratulated Saudi Arabia Government and the Ministry of Health for successfully hosting the haj season 1440/2019 without a single public health event or disease outbreak being reported among pilgrims performing the haj.

In addition, WHO expressed its deep appreciation to all the health care heroes and volunteers for their dedication in providing health care services to 2.5 million pilgrims.

WHO deployed a team of experts to support the Saudi Ministry of Health and ensure public health preparedness measures to prevent any potential disease outbreaks.

The Health Early Warning System (HEWS) tool was developed by the Saudi Ministry of Health in collaboration with WHO to facilitate detection and response. This year, more than 100 alert signals were detected through the new tool. All signals were investigated immediately, and appropriate interventions were then implemented. Happily, none of the signals represented a public health emergency.

During the course of its mission, the WHO team visited health care centers and hospitals in Mina, Muzdalefa and Arafat to see first-hand the work done on the ground. WHO field visits showed that the system is in place and functioning well.

The Saudi authorities were well prepared to prevent and respond to the risks related to mass-gatherings, such as heat illnesses and food poisoning. The high level of preparedness reduced the number of cases to the minimum, and no major health issues were detected among the pilgrims during this year’s haj.

WHO worked with the Saudi authorities to assess health facilities in the Holy Places using standard WHO tools. The results of this assessment will help the authorities to further enhance services and meet the needs of pilgrims.

WHO appreciate the high level of coordination and collaboration that was adopted by all sectors throughout the haj season. This collaborative, multisectoral approach was evident on the ground. All sectors worked beyond the call of duty, employing all resources and exerting all efforts to enable pilgrims with critical health conditions complete their hajj rituals. Air medical evacuation by different sectors was one of many examples.

WHO praises the effectiveness of the public health mitigation measures put in place by the Saudi Ministry of Health to ensure a safe pilgrimage.

WHO and Saudi authorities calls on all countries to commit to the Haj-related health requirement and advises jointly provided and to remain vigilant and continuously monitor any public health threats that may be associated with returning pilgrims, and WHO will be working with all our Member States to strengthen their disease surveillance systems and enhance risk communications. SG