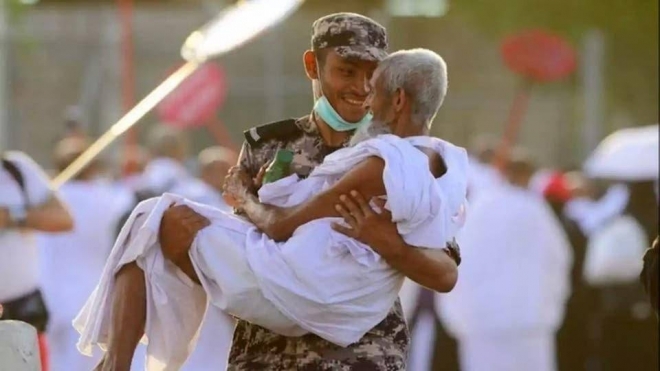 MAKKAH — Majed Ali Al-Hakami, the Saudi security man, who took the mainstream media and social media by storm, with his videos and pictures going viral, said what he did was guided by his religion, humanitarian values and his military duty.

Speaking to Al-Arabiya.net, Al-Hakami said: “This is a responsibility that every security man participating in Haj duties — this year or the previous years — has to shoulder. It is all about maintaining security of the pilgrims and working hard to ensure their comfort and ease in all matters so that they carry out their rituals in comfort, tranquility and with peace of mind.”

He added: “We, whether officers or privates, take the pledge at the very first moments we arrive in Makkah that we will spare no effort in helping and providing all services to the pilgrims.”

Majed Al-Hakami candidly narrated the story behind the picture that drew the attention of the readers and viewers most and became viral on the social media. He said: “On Arafat Day, from a distant point, I saw an old male pilgrim, who couldn’t walk. He would sit down and then stand up. I went to him and asked him if he was complaining of anything. I asked him: “What is hurting you?” He used to reply in Urdu and I couldn’t understand what he was saying. But I could hear his moans and groans. He was in pain. I gave him water to drink and washed his head with cold water.”

Al-Hakami further said: “I was worried if he had stepped on some sharp object or a piece of broken glass. I thought he might fall on the ground. I checked his feet. His feet and legs were shaking and they could not carry him any more. I was concerned for the old man as he might collapse on the ground. I considered him as my father. So I reassured him in sign language “Don’t be afraid, I’m with you. I won’t leave you!”

“I walked with him for a short distance, but he was walking very slowly. So I reassured him in sign language that I would carry him. So I carried him. He then started speaking to me with expressions that I felt were full of gratitude and prayers for me. I smiled all the way while carrying him so that he didn’t feel that he was a burden to me. I was seeking the reward from Allah Almighty.”

Al-Hakami added: “The pilgrim was suffering from pain in the knees due to old age. He couldn’t walk for long distances, so I carried him from Arafat to the train station. I remained by his side for some time. Then I carried him to Muzdalifah so that he would spend the night there. I personally took him to his camp. He was kissing my head and crying. I did not leave the place until I was assured the old man was in safe hands.”

Majed Al-Hakami was silent for a short while, then he continued: “I felt that Allah Almighty had chosen me among thousands of people to take care of this elderly pilgrim on this blessed day. I pray to Allah Almighty that He rewards me!”

Al-Hakami said that on seeing the reactions of his fellow countrymen including praise, supplications and prayers for him after his pictures spread far and wide, he felt blessed.

According to Al-Hakami, any Saudi in his place would have done the same, to serve the pilgrims, in line with directives of the leadership and the Minister of Interior to all the security men.

Al-Hakami did not expect at any moment that his story with the old man would go viral in this way. He said: “By God, I never knew and I wasn’t aware that people were taking my pictures. I am still in a state of surprise till this moment how the pictures spread far and wide.”

He expressed appreciation for all his colleagues, the security men in the various sectors, for the amazing security and humanitarian efforts they put in during the Haj.