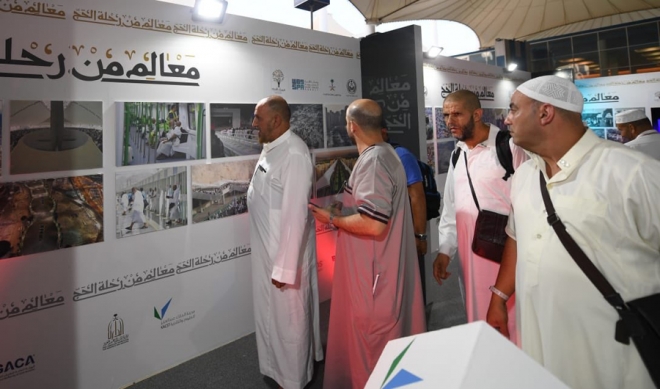 MAKKAH: Pilgrims have one last chance to get a glimpse of the Hajj before leaving the Kingdom as an exhibition goes on display at Jeddah’s King Abdul Aziz International Airport, the SPA reported.

Around 1.8 million Muslims from outside Saudi Arabia performed the Hajj this year, with the majority arriving by air.

It is aimed at presenting pilgrims with a lasting and beautiful image of the Hajj journey as they head home having observed one of Islam’s five pillars. It also shows the development programs and projects initiated by the Kingdom in order to raise the standard of facilities and services so people can perform the rituals with ease and in comfort.

SPA contributed old and new photographs that depict pilgrims’ journeys. These are displayed in chronological order, spanning decades from past to present, to show how projects at the Two Holy Mosques have evolved between the reign of Saudi Arabia’s founder King Abdul Aziz and the reign of King Salman.

The MRDA contributed photos of projects carried out at the holy sites, especially in the Jamarat Al-Aqaba area, these include shots of the Al-Mashaaer Al-Mugaddassah Metro, which only runs during the Hajj season and carries pilgrims between the holy sites.

• The exhibition includes more than 70 photographs, as well as video presentations, showcasing aspects of the pilgrimage. It is being sponsored by the Makkah municipality.

• It is aimed at presenting pilgrims with a lasting and beautiful image of the Hajj journey as they head home having observed one of Islam’s five pillars.

The metro line is an important piece of Hajj infrastructure. Figures published by the Saudi Railways Co. (SAR) earlier this week showed that 340,035 pilgrims were transported by the Al-Mashaaer Al-Mugaddassah Metro to Mount Arafat, over 353,434 were transported to Muzdalifah, 377,199 from Muzdalifah to Mina, and 1,246,422 to the Jamarat facilities during the days of Tashreeq.

Such infrastructure projects have been carried out under the supervision of Makkah Gov. Prince Khaled Al-Faisal.

The exhibition gives pilgrims a chance to get instant prints of the photos for personal use. The exhibition will have two shifts, from 11 a.m. until 11 p.m., to accommodate as many visitors as possible.