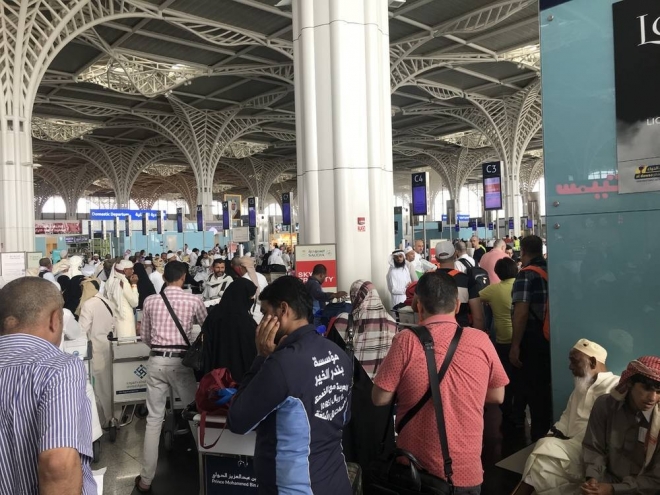 MADINAH — Some 130 Haj flights are taking off daily from Prince Muhammad Bin Abdul Aziz International Airport in Madinah carrying pilgrims back to their respective home countries.

The airport has completed all arrangements for the return journey of the pilgrims including 300 African tribal chiefs and a number of priests from 49 countries who were guests of the Custodian of the Two Holy Mosques King Salman within his special program for the Haj and Umrah.

Under the program, the King invites a number of Muslims from various parts of the world to perform the Umrah or Haj under his own personal expenses.

This year, the King has invited as many as 6,500 pilgrims from 79 countries within the program being supervised by the Ministry of Islamic Affairs, Call and Guidance.

The tribal chiefs and the priests have recently embraced Islam and therefore were performing the Haj for the first time.

They were all praise for the King who enabled them to do the pilgrimage and for the Saudi government for the excellent services that made them complete their Haj rites in ease, peace and comfort.

The ministry said its preachers, who have been working in Africa for more than 25 years, have conveyed the King's invitations to the new Muslims.

Meanwhile, the department of health affairs in Madinah has established a command and control room to follow up the medical treatment and the health condition of the pilgrims who are confined in various hospitals in the Prophet's City.

Dr. Nasser Al-Harithy, assistant director of the department said the room is supplied with cameras, computers and screens that show the movements of the patients and the doctors in addition to the location of the ambulance cars.