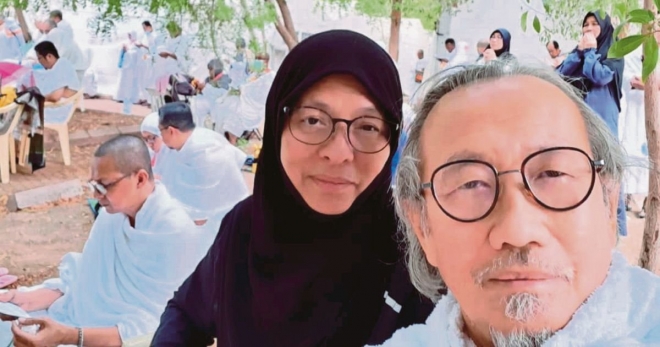 KUALA LUMPUR: After three months on the road, retired couple Adnan Abdullah and Hadibah Idris have fulfilled their lifelong dream of travelling by land to perform the haj.

And as they get closer to the end of their pilgrimage, they are preparing for the next leg of their journey.

The couple completed the obligatory rites for their pilgrimage last week, and they are spending the remainder of their time in Makkah and Madinah.

Coping with the Saudi Arabian heat and having just recovered from cough, Adnan and Hadibah are spending their time with ibadah (acts of worship) at Islam’s holiest sites.

“Alhamdulillah (praise be to Allah), we are well, but we had a bit of cough. We are in Makkah and the temperature is 42 degrees Celcius,” said Adnan, 65, a retired interior design lecturer.

He said he and his wife completed the rites during the peak of the haj season, or mashae’er.

They arrived by air in Jeddah from Dubai on Aug 3, and joined the movement of about three million pilgrims as they converged on Arafah for wuquf on Aug 10.

They joined the pilgrims as they continued the rites to Muzdalifah and Mina for the stoning ritual.

Adnan said he and Hadibah, 64, completed their haj obligations by returning to Masjidil Haram in Makkah.

There, they performed the tawaf (circumambulating the Kaabah) and saie (walking between the hillocks of Safa and Marwah).

“Alhamdulillah, Allah invited us, we are grateful. For now, we only have our ziarah (visit) to Madinah to do.

“But we need to wait for a while before going to Madinah as there is a huge number of pilgrims there. We will travel there when their numbers dwindle. There are many Malaysian pilgrims who are returning home via Madinah.”

Adnan and Hadibah are expected to return by air to Dubai from Jeddah on Sept 3.

After that, the couple will have to look into the repairs that need to be done to their modified 2011 Ford Ranger 2.5 WLT.

They drove the vehicle through seven countries from Malaysia to the United Arab Emirates.

Adnan said the vehicle, which they call Unta Kurus, or lean camel, based on a verse in the Quran, was being taken care of by two Malaysian friends in Dubai.

Prior to arriving in Saudi Arabia, the couple’s last extended pit-stop was in the United Arab Emirates.

“Our friends in Dubai, Nazli and Nik, are making arrangements with the mechanic over there for Unta Kurus.

“They are engineers with Emirates Airlines. They also own Dune Buster four-by-four vehicles.”

The couple performed their haj with furada (private) visas, which were given to them after an application was made by their family through the Saudi Arabian embassy in Malaysia.

They left their Shah Alam home on May 2, four days before the start of Ramadan. The first part of their journey took them to Thailand, Myanmar, India and Nepal.

However, they were delayed for more than a month after they reached Islamabad, Pakistan, as they faced problems with the visas for one of the countries they were planning to go to.

The New Straits Times followed them through the Pakistan leg of their journey last month.

However, they later encountered technical issues with Unta Kurus when they crossed the desert terrain at the Pakistani Iranian border.

Although they repaired their vehicle in Bandar Abbas, Iran, it resulted in the Unta Kurus functioning at only 65 per cent efficiency.

The couple had said that they planned to continue their overland journey by spending the winter in North Africa.

They may also visit Hadibah’s brother in Oman and visit their eldest son, Syrrunafis, 39, who works as a quantity surveyor and lives in Manchester, the United Kingdom.

They plan to return to Malaysia by going through the Stans, before crossing into eastern China to Kashgar, and getting on the Karakoram Highway back to Pakistan. The journey will continue down south through western India and Bangladesh.

From there, they were considering shipping Unta Kurus back to Malaysia.