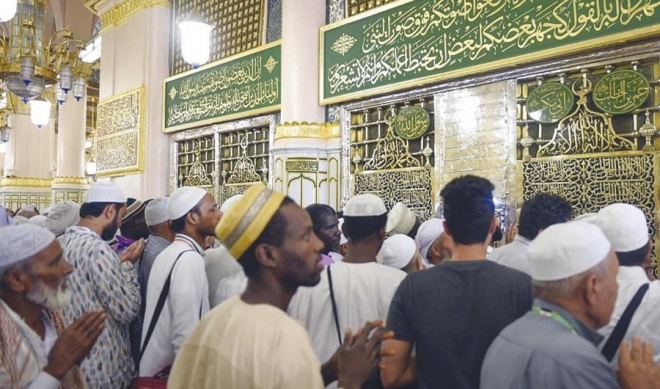 MADINAH: Pilgrims and visitors in Madinah are eager to visit the Sacred Chamber and the graves of Prophet Muhammad and his two companions, Abu Bakr Siddiq and Omar ibn Al-Khattab.

The name “Sacred Chamber” refers to the Prophet’s house, where he lived with his wife Aisha bint Abu Bakr. It is located in the southeastern section of the Prophet’s Mosque.

When the Prophet died in the room of Aisha, his companions deliberated about where he should be buried. Abu Bakr Siddiq said that he heard the Prophet say “Prophets are buried where they died,” so he was buried in the south of the Sacred Chamber.

However, out of respect for Omar after his demise, Aisha put up a partition to separate the area where she lived from the graves because Omar was not a Mahram (an Islamic word for a person who a woman is never permitted to marry because of their close blood relationship).

The chamber has undergone many repairs, starting with the work of Omar ibn Al-Khattab to the Prophet’s Mosque in 638, where he replaced the fronds in the house with a wall. Alwaleed bin Abdul Malik, the sixth Umayyad caliph, expanded the mosque in 707. Omar ibn Abd Al-Aziz, the eighth Umayyad caliph, rebuilt the chamber with black stones and then erected a pentagonal wall so as not to resemble the Kaaba.

The chamber has undergone many repairs, starting with the work of Omar ibn Al-Khattab to the Prophet’s Mosque in 638.

In 1162, King Nur Ad-Din dug a trench around the chamber and filled it with molten lead in order to prevent tunneling. In 1269, King Baibars erected a wooden cabin with barriers and three doors, and in 1294, King Zainuddin Kitbugha expanded the barrier of the cabin until it reached the roof of the mosque. In 1279, Sultan Mohammed bin Qalawun Salhi built a dome above the chamber. It was a square at the bottom, octagonal at the top and laminated with lead plates.

In 1476, An-Nasir Hasan ibn Muhammad ibn Qalawun renovated the dome, and in 1481, the dome was damaged by the mosque’s second fire. In 1482, during the reign of Sultan Qaitbay, the dome was rebuilt with bricks based on strong pillars on the ground. Copper windows were added to the chamber on the Qibla side (the direction that should be faced when a Muslim prays during salah) with a copper grille at the top. In the north, east and west, iron windows were added.

In 1487, the dome was rebuilt with white gypsum after it cracked. In 1817, during the reign of Sultan Mahmud bin Abdul Hamid, it was rebuilt for the last time in its present form. Then, in the same year, the Ottoman Sultan Abdul Hamid ordered the dome to be painted green. Since then, it has been known as the Green Dome.

Since the reign of King Abdul Aziz Al-Saud, Saudi Arabia has paid a lot of attention to the Sacred Chamber and the Green Dome. It has maintained the Ottoman construction of the Prophet’s Mosque and worked to strengthen and renovate it whenever necessary.


⇐ Previous:
Makkah honors designer of ‘gateway to the heart of Islam’
Next: ⇒
Over 193,000 pilgrims arrive in Madinah; Egyptians top the list