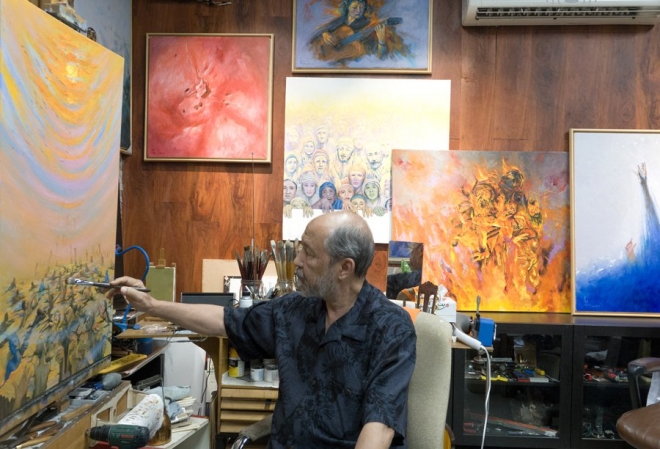 JEDDAH: Makkah Gate, a magnificent structure that spans the width of the Jeddah-Makkah highway, has been welcoming visitors of the holy city for 34 years.

Many asked the question of who built it, and it was announced recently by the governor of Makkah, Prince Khalid Al-Faisal, that the names of all those who contributed to building the structure will be recognized, fulfilling the wish of the structure’s designer, Dia Aziz Dia.

Dia spoke to Arab News about the significance of the gate and why it was important to him that every individual who contributed to the project received the recognition they deserve.

IN NUMBERS 152 meters in height 31 meters in width

The large arched sculpture located 5 kilometers outside the city limits was initially proposed in 1979 by the Makkah municipality and a private contracting office.

“After a lot of thinking of what makes the city of Makkah so important, a few ideas came to mind such as the Prophet Muhammad (peace be upon him) and the Kaaba, but what sprang up to me most was the Qur’an. It all started with the descent of the Qur’an to Earth and my thoughts were searching for the appropriate way where people would recognize the idea of the descent through the design.”

The idea of the Holy Qur’an on top of a rehal, an X-shaped stand to place holy books on while reciting, was what came to mind after a few days of thinking. The designer’s idea was accepted by the company, and he worked with architects, civil engineers and calligraphers hand in hand to realize the final sketch and create a small model of the gate.

“I went to the office of Abdulqader Koshak, Makkah’s mayor at the time, and presented him with the final design of the gate and approximately two months later, it was announced that King Fahd agreed to build this gate and the surrounding gardens,” said Dia.

Dia added in this artist’s rendition a search light on top of the Makkah Gate to symbolize the structure as a beacon of peace and hope.

After handing in the design for the gate, Dia parted ways and a few months later, construction began on the gate, completed in 1985.

Dia considered the gate to be a beacon — as part of his primary design, a search light centered atop the gate was proposed, but wasn’t added upon completion.

“The reason behind my proposal for adding this search light is because I wanted it to show how the Holy Qur’an is a beacon of hope and peace, how the city of Makkah is that as well, not only to the Muslim faith, but to the world as well. To show its importance, its significance,” said Dia.

The artist hopes that his proposal to add the search light on top of the structure will be fulfilled one day, to complete the design.

“The reason behind my insistence to include all contributors to the gate is due to the fact many didn’t know that Saudis were mainly those who worked on the project. Some believed that foreigners were brought in to build it when the fact is Saudis were mainly the ones. This gate is a representation of the Saudi architects, calligraphers and engineers’ contributions,” said Dia.

As one of Saudi Arabia’s oldest and most successful artists, it’s no surprise that a man of Dia’s renowned yet humbled stature would be a contributing factor in building one of Saudi Arabia’s most recognizable structures. With over 40 years of contributions to the Saudi art scene, Dia considers his work designing the Makkah Gate the most important work in his career, his legacy.

“This is the most important accomplishment in my life, since the beginning of my career until the day I die. As far as I am concerned, there’s nothing more important than that,” he said. “Makkah is the city in the heart of every Muslim in the world and I believe that God arranged for me to be the designer for the Gate of Makkah.”