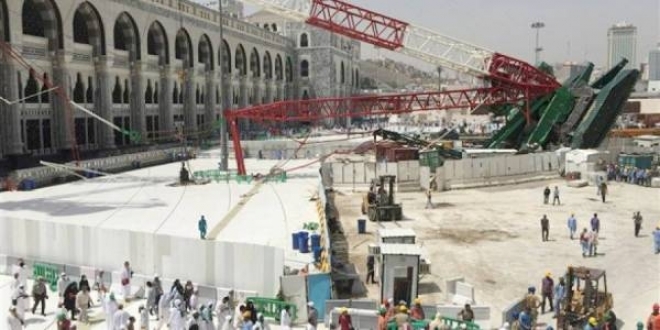 JEDDAH — After nine months of hearings, the second circuit of the Criminal Court in Makkah has exonerated Binladen Group from the responsibility of the September 2015 crane crash in the Grand Mosque in the holy city.

After listening carefully to the black box data, the court said there was no dereliction of duty on the part of the accused which led to the collapse of the giant crane which killed 110 people and injured 209 others.

The court also absolved the group from paying diyyah (blood money) to the families of the deceased or financial compensations for the injured and the damage.

It said the attorney general who was representing the martyrs and the injured has no right to demand the private rights for them.

The German-made crane weighed 1,350 ton and fell down due to bad weather and strong winds.

After questioning 88 engineers from the group, the court was convinced that the crane was in an upright and correct position.

"There was no proof that the Binladen Group had made any mistake that led to the fall of the crane. The evidence brought by the attorney general was not sufficient to incriminate the group," the judge said.

The court said according to the weather forecast of the Authority of Meteorology and Environment Protection the wind speed was between 18-32 km per hour while it was actually much stronger.

The court said, according to the operation manual, the crane could withstand winds which are of speed of more than 70 km an hour.

The court also said the finance ministry has no right to demand the shifting of the crane to another place away from the Grand Mosque.

"This is the responsibility of the Civil Defense. The crane was still needed to do some work in the Grand mosque," the court said.