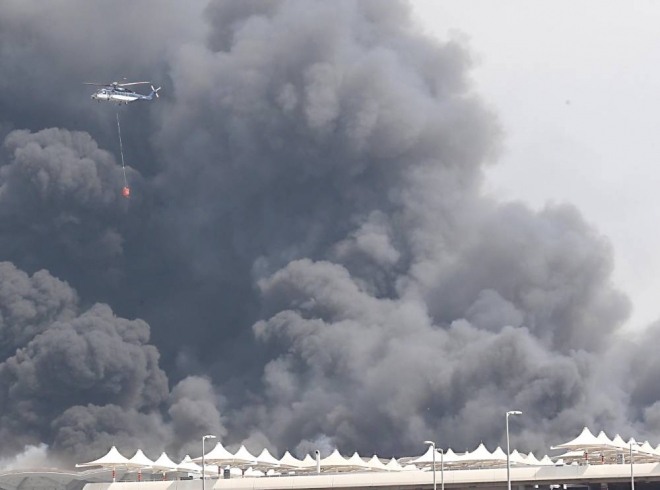 JEDDAH — Ten people were injured in a fire that broke out in the roof of the Haramain High Speed Rail station in Sulaymaniyah district here on Sunday.

The Department of Emergency and Crisis at Jeddah Health Affairs said that it transferred four of the injured to the hospital east of Jeddah while six others were treated at the scene.

The blaze erupted at 12:35 p.m. on the roof of the fourth floor of the station building with huge palls of smoke seen billowing into the air, darkening the morning skies above the station.

The Civil Defense forces, with the support of helicopters, had to battle for long hours to put out the fire. Several units of the Civil Defense in the Makkah region have swung into action to extinguish the fire and evacuate the people trapped inside the station.

The security forces used choppers equipped with water tankers to quell the blaze.

Huge plumes of gray smoke rising from inside the complex blanketed the areas surrounding the station, forcing security forces to close the Haramain Expressway linking Makkah and Madinah via Jeddah and cordon off the site.

The fire broke out at a time when traffic was heavy on the streets, squares and main streets surrounding the train station. Traffic was heavy as it was the time when schools closed and the end of employees’ morning shift.

The police diverted vehicular traffic on these streets toward alternative streets, to clear the way for emergency vehicles, fire engines and rescue workers.

Forces for the security of installations and traffic patrol teams joined Jeddah police in supporting rescue workers from carrying out their mission uninterruptedly.

Director of Public Relations in Jeddah Traffic Col. Zaid Al-Hamzi was seen instructing drivers to stay away from the fire scene and resort to alternative roads.

Dr. Samer Osra, director of emergency and crises department at Jeddah Health Affairs, said that once he was alerted he had raised the alert level to yellow in three hospitals in Jeddah.

He also stressed that there were eight medical teams working on site, in addition to teams from the Red Crescent Authority.

It operates trains that travel at a speed of 300 kilometers per hour and is the fastest train in the Middle East.