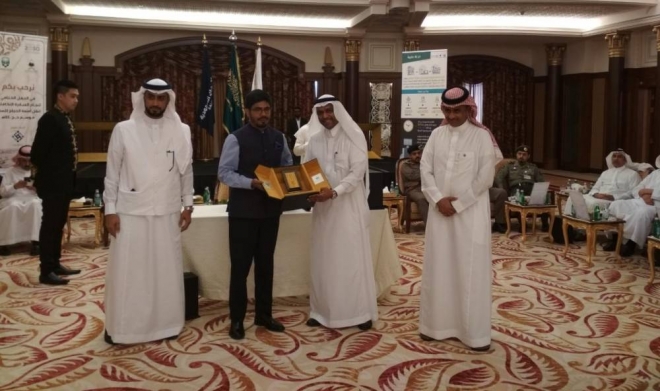 JEDDAH – Around 92 percent of Indian pilgrims were fully satisfied with the services and facilities made available to them during this year’s Haj season, according to a survey.

Speaking to Saudi Gazette, Indian Consul General Mohammed Noor Rahman Sheikh said that more than 83,000 pilgrims participated in the post-Haj online survey, conducted among the pilgrims for the first time. “The Indian Haj mission started conducting the survey during the Haj of 2018 by distributing survey points, printed in the three languages of English, Hindi and Urdu, through Haj employees and volunteers and a total of 25,000 pilgrims participated in it. However, this year we introduced online survey and the response for this was tremendous with an increase in the number more than three times,” he said.

“We are extremely grateful to Custodian of the Two Holy Mosques King Salman, Crown Prince Muhammad Bin Salman, Minister of Haj and Umrah Mohammed Saleh Benten and all officials for their utmost keenness to ensure smooth operation of Haj,” Sheikh said. Around 650,000 Indian pilgrims came for Umrah during the last season and there would be an increase in this number in the new season thanks to the new visa regulations and concessions, he said.

At a recent function, Deputy Minister of Haj Dr. Abdul Fattah Mashat appreciated India’s excellent Haj arrangements. He presented a memento to Sheikh in honor of the outstanding contributions in the overall Haj management, specifically the smooth handling of baggage and transportation.

The consul general noted that the online survey is one of the major initiatives aimed at achieving qualitative leap in the services and facilities being rendered to Haj pilgrims year after year. The survey covered 61 percent of the pilgrims who came through the Haj Committee of India (HCI). Of the total quota of 200,000, 140,000 pilgrims came through HCI and the remaining 60,000 through the Haj Group Organizers (HGOs). “We analyze the surveys and present the feedback in our meetings with India’s Ministry of Minority Affairs and HCI as well as with the Saudi officials in our earnest desire to further improve the services,” said the consul general who attended the meetings of HCI in Mumbai earlier this week.

He said that the recent visit of a government of India delegation, headed by Sailesh, secretary of Ministry of Minority Affairs, was also part of improving the services for pilgrims. “The delegation had monitored all aspects of the Haj operation meticulously and expressed satisfaction over the elaborate arrangements made in terms of transportation and accommodation of pilgrims in its bid to find out the loopholes if any and address them during the coming Haj season. One aspect noticed by the delegation was the departure phase of Air India flights that was not up to the standard and hence there will be more focus on improving air operation in future,” he said.

Sheikh said priority will be given to proper orientation of pilgrims well before their arrival in the Kingdom. “Pilgrims from a few states, including Kerala, Tamil Nadu, Maharashtra and Kashmir have benefited well from orientation courses and therefore the focus will be to further enhance the orientation at pan India level. We are keen to ensure that Hajis would come well oriented in all major aspects of the pilgrimage while they are in Makkah and Madinah and at the holy sites,” he said.

“Hajis, who spend huge amount of money, are coming with big expectations including personal attention and we have to cater to it.” During last Haj, there were more than 9,000 Hajis above 70 years of age, some leaving their villages and regions for the first time.

There were no complaints about buildings. Transportation facilities have improved so much, with deploying new fleet of buses, including 2020 models, the consul general said.

There has been an increase of 25,000 in the quota of pilgrims for the Haj, thanks to the visit of Crown Prince Muhammad to India earlier this year. “Finding accommodation, transportation and ensuring administrative and medical arrangements for these pilgrims in a short span of time was really a challenge for us. However, we were geared up to meet these challenges just like a well-oiled machine. “This challenge also gave a lot of excitement to all of us. India’s Ministry of Minority Affairs and Ministry of External Affairs, Ambassador Dr. Ausaf Sayeed and the whole consulate team, Haj deputationists as well as volunteers, and community members all were geared up to handle this number in an excellent manner,” he said.

Sheikh said that the Haj mission handled a total of 507 flights that transported 62,000 and 78,000 pilgrims to and fro between various embarkation points and Madinah and Jeddah respectively. “It was a big task to handle daily 25 flights in Jeddah and Madinah.”

The consul general claimed that the Indian Haj mission has accomplished major portions of the Makkah Route Initiative, namely pre-allotment of buildings in Makkah and Madinah and pre-tagging of baggage and the remaining elements are simply biometrics and pre-immigration. “We introduced pre allotment of buildings in Madinah for the first time this year and it has helped the pilgrims significantly. Pilgrims were taken straight to their rooms immediately after their landing but in the past years it took four to six hours for pilgrims to find out their accommodation while porters under Maktabul Wukalaa transported their baggage directly to their accommodation.

He said this year, the ministry introduced a new system that made qualitative leap in accommodation in Makkah by ensuring every building is inspected and certified by its officials prior to hiring them. The ministry concluded an agreement with India’s Oya company to standardize the quality of buildings with a ‘minimum criteria’ yardstick. “We have to choose only those buildings which carry a board that contains information such as the building’s license number, owner, capacity and telephone number.”

He said the online OPD System, called “e-MASIHA” was a resounding success with 480,000 OPD visits by pilgrims and that gave access to medical history of the pilgrims in a very professional and advanced manner.

Sheikh attributed the success of the Haj operation to the overall supervision of Ambassador Sayeed, who had handled Haj operation during his stint as consul general earlier. “The ambassador was very helpful and guided us in the best manner and was instrumental in making the Haj operation much easier,” he said while thanking his committed and hard-working consulate team members, especially the newly joined Haj Consul Y. Sabir, for the excellent Haj operation.