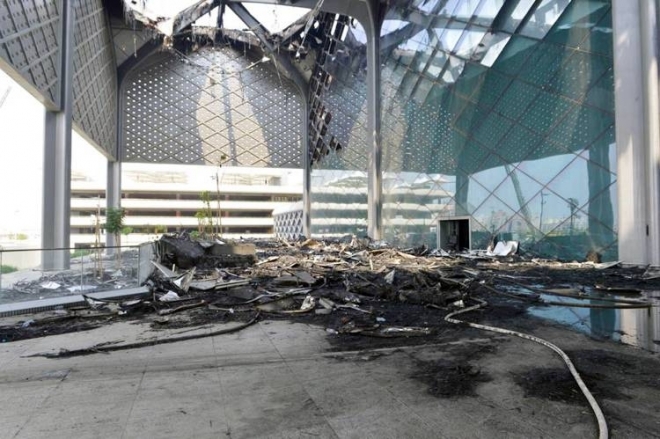 RIYADH — The Public Prosecution has reaffirmed on Wednesday that it will verify if any crime was involved in the fire at the Haramain High Speed Rail station in Sulaymaniyah district in Jeddah.

“The verification will be made in accordance with the regulations and instructions, following the principle of transparency and total neutrality,” the Public Prosecution said in a statement.

The surveillance unit at the Public Prosecution noticed tweets of a person in his Twitter account more than once, about allegations of suspicion of corruption related to control systems and fire in the rail project.

The man claimed that he had supportive documents to prove it. Eventually, the competent department to investigate the crimes at the Public Prosecution interrogated him and recorded his testimony.

The Public Prosecution also concluded through the course of the investigation that the individual had been under investigation in previous criminal cases, in addition to being sacked from his job due to labor related issues.

This happened before his reported claim about embezzlement involving his company, knowing that the company where he worked had nothing to do with the implementation of the train station project.

Minister of Transport and Chairman of the Board of Directors of the Saudi Railways Company (SAR) Dr. Nabil Al-Amoudi announced on Tuesday that the Haramain High Speed Train would resume its service within 30 days, using the new King Abdulaziz International Airport (KAIA) Station to serve the residents and visitors of Jeddah.

The train will operate between Makkah and Madinah via the KAIA and King Abdullah Economic City of Rabigh. The train service had been suspended on Sunday following a massive fire that struck the rail station in Sulaymaniyah district of Jeddah.