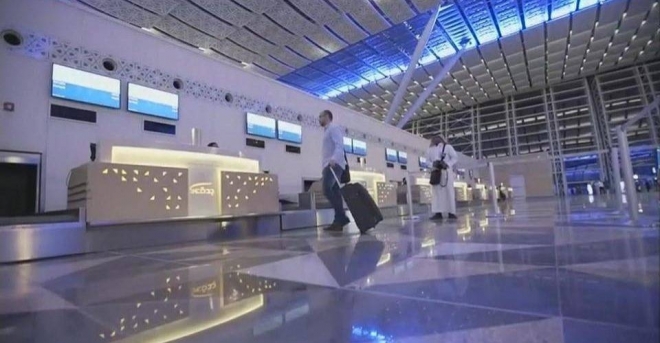 JEDDAH — The General Authority of Civil Aviation (GACA) announced that Saudi Arabian Airlines flights to seven international destinations would be relocated from the old terminal of King Abdulaziz International Airport (KAIA) to the new terminal (Terminal 1) from Monday, Oct. 28.

GACA said that the plan to transfer flights to Terminal 1 at the new Jeddah airport has been prepared in cooperation and coordination with the civil aviation companies, especially Saudi Arabian Airlines, and other national and international carriers.

The relocation of the flights from the old airport to the new one will be gradual in in order to sustain and raise the efficiency of operation.

The new airport had earlier begun operations via its Terminal No. 1 to the airports of Abu Dhabi, Muscat, Bahrain, Erbil, Sharm El Sheikh, Amman and Alexandria.

Custodian of the Two Holy Mosques King Salman inaugurated on Sept. 24 the new airport terminal in a ceremony organized by GACA. The airport terminal, sprawling over a total area of 810,000 square meters and annual capacity to hold 30 million passengers in the first phase, is one of the largest airports in the Middle East.

The new airport had the soft opening in May 2018 with the landing of a domestic flight from Al-Qurayyat.

More than 26,000 engineers and workers belonging to 100 companies raced against time to complete the first phase of the airport project, costing SR27 billion.

Located 19 km north of the Jeddah city, the airport is regarded as a world-class iconic and high-tech gateway to the Two Holy Mosques. The KAIA, one of the largest aviation hubs in the world, is a smart, environment-friendly, unique landmark of the Arab and Islamic architecture.