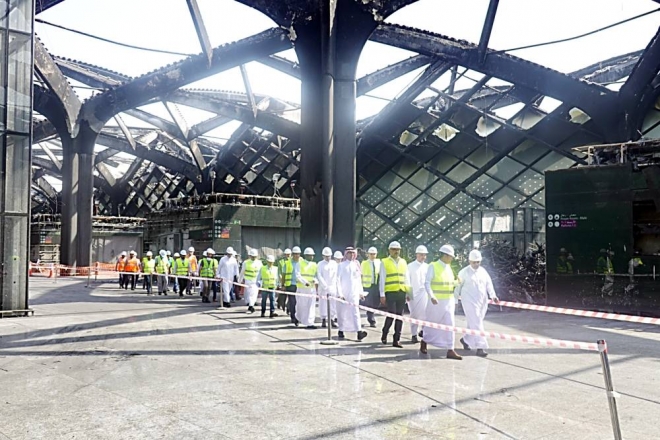 JEDDAH — Saleh Al-Jasser, minister of transport and chairman of the Board of Directors of the Saudi Railway Organization (SAR), made on Thursday an inspection tour of the Haramain High-Speed Railway’s Sulaimaniyah station and the King Abdulaziz International Airport station in Jeddah to check on the preparations to resume operations.

Al-Jasser was briefed on the station’s facilities, as well as the most recent repair works and arrangements to resume the train service.

The visit was part of the Haramain Rail Project Management’s efforts to resume operation of Haramain train station in Sulaymaniyah in the near future and prepare for the operation of the new airport station which will serve passengers coming through airport as well as residents of Jeddah.

The Haramain train network, which was hit by a huge fire at the Jeddah station on Sept. 29 is expected to resume train trips between Makkah and Madinah via the new airport railway station shortly.

The train is now completing its experimental operations for the public safety after the civil works and the basic infrastructure of the new route has been completed following the fire at the main station in Sulaimaniyah district.

The new double-track route, which the train is now using, is 1.5 km. The Al-Rajhi Consortium has completed the civil works and the basic infrastructure and handed them over to Al-Shula Consortium, which made the rail extensions and the electricity networks.