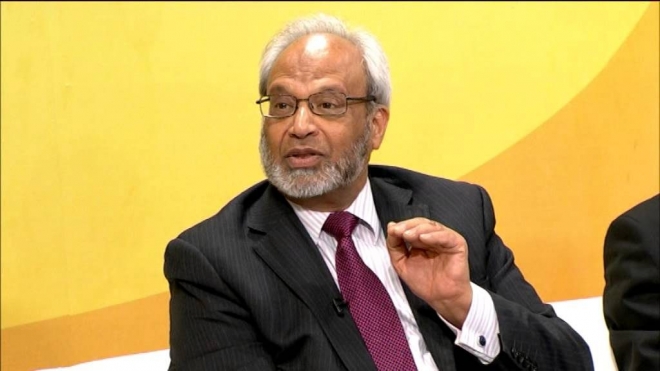 Hyderabad (Rahnuma) An international conference on religious mass gathering and global health was held at Avasa Hotel, Hitec City- Hyderabad in the last week of October 2019. The conference was chaired by Dr. Shuja Shafi, a doctor by profession whose brainchild MGHN (Mass Gatherings and Global Health Network) is a non-governmental organization. The conclave brought together heads of Faith, policymakers, academic communities and civil societies to recognize the importance of health and well-being at Religious Mass gatherings.

In attendance at the Symposium was the correspondence team of The Rahnuma Daily (therahnuma.com), who arranged a one on one with the celebrated Doctor to learn from him the concept behind the inception of MGHN(Mass Gatherings and Global Health Network).

Dr. Shafi originally hails from Hyderabad, he is an alumnus of Osmania Medical College. After completing MBBS in the early 70’s, he moved to the United Kingdom to pursue FRC (Pathology). Contributing to the health sector in varying degrees, he was the director of Public Health Lab (London) besides being at the helm of prominent health institutions, having worked at NHS, University of London, Public Health Laboratory Service and Health Protection Agency as Lecturer, Hospital Consultant and a Clinical Regional Post Graduate Advisor during the course of his 50 year long career in Medicine.

He is the current Secretary General of the Muslim Council of Britain (MCB), Dr. Shafi has also been working on religious slaughter issues since 2003, where he chaired the MCB Food Standards Committee and prepared the Council’s response to the Farm Animal Welfare Council report on Red Meat and contributed to developing Good Practice Guidelines for religious slaughter (without stunning).

Under the guardianship of the Telangana State Commission, Dr. Shafi’s non-profit organization MGHN recently collaborated with the Telangana Hajj committee on a pilot project that involved accumulation of Medical history of every Hajj pilgrim from Hyderabad. The project is a first of its kind initiative in India, the purpose of this endeavor is to provide medical aid to pilgrims who fall sick during their stay in Saudi Arabia.

The cache of information is a medical record of a person’s health. A personal medical history may include information about allergies, illnesses, surgeries, immunizations and results of physical exams and tests. It also comprises information on medicines taken by a person every day and probable health risks.

A dedicated Datacenter has been incorporated which stores medical records of all Hajj pilgrims leaving for Saudi Arabia. Taking aid of Biometrics (Fingerprint, Face and Iris recognition) the record of a Hajj pilgrim is locked to his physical indicators. Doctors designated to provide medical assistance during the pilgrimage can access the medical history of an individual available on the datacenter over the internet.

For instance, if a pilgrim faints while performing Hajj, the doctor operating on a person may not be entirely sure on what drug to administer unless he is aware of the patient’s medical history. To eliminate this uncertainty, the doctors can access an individual’s medical record available on the MGHN datacenter by using biometric identifiers of the patient. This groundbreaking advancement will save lives of scores of pilgrims.

The pilot project implemented this year has yielded promising results. Convinced by success of the project, the Telangana Hajj committee has granted approval to the implementation partners of MGHN to scale up the project for next year’s Hajj pilgrimage.

When asked to shed light on the conceptualization of MGHN, Dr. Shafi took a step back in time to narrate the germ of the idea. Almost 20 years ago when he was working as the director of Public Health Lab in London, reports of a large epidemic of meningitis linked to the Hajj pilgrimage were first reported. Cases of similar meningococcal disease also occurred world-wide after pilgrims from Saudi Arabia returned to their countries.

Deeply affected by the phenomenon, he launched an extensive international investigation on the causes and effects of the outbreak. His visited every renowned mass gathering of pilgrims across the world. His scope of inquiries took him to Saudi Arabia(Annaul Hajj), India(Kumbh Mela), Bangladesh(Bishwa Itjema), Iraq(Arba’een Pilgrimage) and Phillippines (for Pope Francis’ Catholic Mass in 2015).

He examined a multitude of people from various countries thronging the pilgrimage/convention. He collated vital information on the susceptibilities of people from a region being infected by those from other regions who are potential carriers of pathogen transmission. His survey cemented the idea, the infestation is a result of Hajj Pilgrims of the UK carrying the disease from Saudi Arabia. The dire calamity demanded an immediate need to formulate a policy on mass gatherings.

Dr. Shafi vigorously began working with the government of the UK and the ministry of health of Saudi Arabia on drafting guidelines for Hajj pilgrims. It was agreed upon to administer every pilgrim exiting the UK with quadrivalent ACWY vaccination. Since 2002, it has become a compulsory entry requirement into Saudi Arabia who are on Hajj and Umrah.

Thanks to Dr. Shafi’s relentless efforts, the WHO (World Health Organization) now provides planning (guidelines) and operational support (vaccination) for public health preparedness to organizers of mass gatherings all over the world. The ACWY vaccination is now available in over 1400 independent pharmacies of Hyderabad at a subsidized price.

When asked to comment, on the developments on preventing the spread of MERS (Middle East Respiratory Syndrome) illness that is passed on to Humans by Dromedary Camels. Dr. Shafi shared his excitement on the recent developments he is keenly keeping a track of.

He lauded Saudi Arabia’s incessant efforts on containing the disease to the confines of its terrain. Since the first reported case of MERS in 2012, Saudi Arabia has come a long way in taking measures to contain its proliferation.

Since starting operations, MGHN has organized 3 international conferences. The first religious mass gathering and global health conference was held at the House of Lords in London, on 22 November 2018 and the subsequent chapter was held at Avasa Hotel, Hitec City- Hyderabad, on 29 October 2019.

The roundtable discussions provided an opportunity to agree on research agenda identifying communicable diseases. The 3 areas of priority that require immediate attention were zeroed in as Tuberculosis (TB is regarded as WHO’s global emergency), Antimicrobial resistance and Influenza.

Dr. Marianne Sinka – Head, Indonesia Haj Mission and a Senior Postdoctoral Researcher from Indonesia will be convening the 3rd religious mass gathering and global health conference in Indonesia in 2020.

Talking to a correspondent of The Rahnuma, Dr. Sinka lauded the ingenuity of the concept. Adding further he said, “It is challenging to manage a mass gathering in the most effective way, the idea of Dr. Suja should be developed. My work in Indonesia is to stem the flow of the pilgrims going to Hajj. If we succeed in managing the health of pilgrims during the Hajj gathering it will be my greatest contribution. The communicable diseases will drastically reduce in India and Indonesia if we collaborate continually. The ultimate goal is to contain the spread of diseases.”

FACT CHECK: India is the second-largest contributor of Hajj pilgrims every year behind Indonesia.

Though aged 75, the number hasn’t deterred the spirit of Dr. Shafi. He is a frequent traveler, a workaholic by nature who takes part in at least 25 to 30 mass gatherings every year. This year alone he has visited Hyderabad thrice to discuss the achievements garnered on the pilot project. Currently, he is closely working with the Telangana Hajj committee, charting out plans for next year’s Hajj pilgrimage.

During the interview, it was revealed, how on short notice from the Telangana Hajj committee a mere 3 days before the departure of the Hajj pilgrims from Hyderabad. MGHN volunteered to perform various health checkups and tests to over 5000 Hajj pilgrims, it also provided them with necessary vaccinations and medicines. Dr. Shafi commended the efforts of his associates and implementation partners (Concent Solutions Private Limited and Help Hyderabad) to make it happen.

The diagnosis devised by Dr. Shafi is 80% cheaper compared to the price prevailing in the market. He is averse to the idea of gaining financial favors neither from NGOs nor the Government. His sole intention is to do his part for the well-being of Pilgrims around the world. His contribution on spreading awareness on communicable diseases and its cure has set a benchmark in the field of Medical Science.

Parting away, Dr. Shafi quoted, “Service to Humanity is service to God.” He signed off on a thought-provoking note.