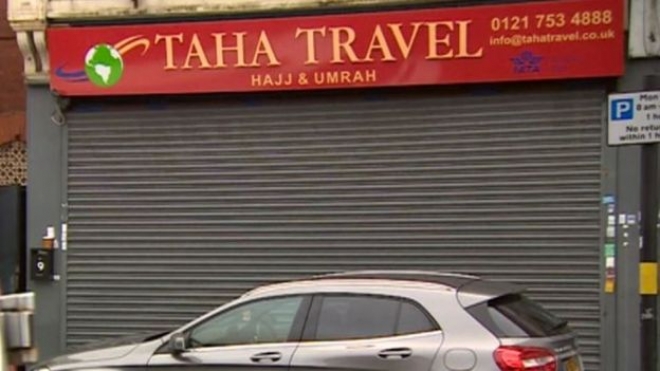 Worshippers fear they will lose thousands of pounds after their Hajj pilgrimages to Mecca were cancelled.

Pilgrims, who each bought packages through travel agent Taha Travel, in Small Heath, Birmingham, said refunds were not received and the shop was closed.

One woman took 17 years to save for her family's summer trip to Saudi Arabia.

Jameil Kendawi, of Taha Travel, said he was trying to pay back funds.

Every year millions of Muslims make the journey to Mecca.

An investigation by BBC Midlands Today found at least 11 people paid for packages for their families, which were being sold by Taha Travel for up to £4,000 each.

It is understood the firm was not Atol protected.

Mohammad Asif Qureshi, from Birmingham, said his family's bags were packed until they received the "disastrous" news they were unable to go on their trip.

"My wife is really depressed. It took her about 17 years she was saving," he said.

"I have never heard before of somebody doing this. I've truly trusted a person.

"I thought how can somebody do this kind of job on a pilgrimage."

Shahnaz Latif said she had been preparing for the trip for five years and the disappointment was "very hard" for the family to deal with.

In September, Mr Kendawi, a director of Taha Travel, spoke to the BBC when he was in Iraq and said he was "let down by the Saudi authorities."

The BBC has contacted Mr Kendawi on several further occasions, but he failed to respond to requests for comment.

Rashid Mogradia, the chief executive officer from the council of British Hajjis, said people should look for licensed Hajj organisers to make sure the company had a Ministry of Hajj and Umrah licence accredited by the Saudi Ministry.