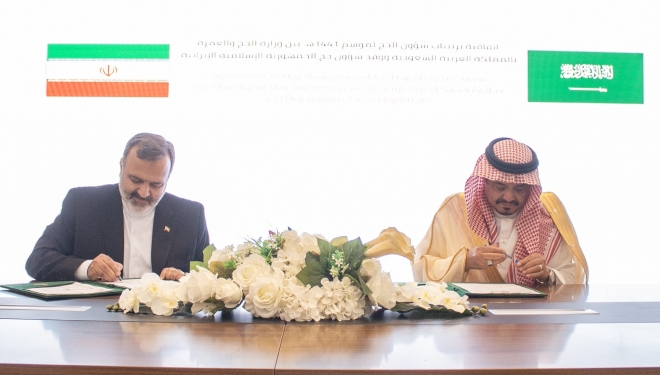 The Saudi Minister of Hajj and Umrah Mohammed Salih Bentin received today in his office in Makkah Ali Reza Rashidian, head of the Hajj and Pilgrimage Organization in Iran in preparation of the upcoming season.

The meeting was attended by Abdulfattah bin Sulaiman Mashat, deputy minister for Hajj and Umrah in the Kingdom, and a number of Saudi officials.

Bentin and Rashidian signed a treaty related to the arrival of Iranian pilgrims.

Bentin confirmed in a press conference “the keenness of the government of King Salman and Crown Prince Mohammed bin Salman to provide all necessary facilities for pilgrims coming from around the world.”

In addition, he expressed his thanks to Iranian pilgrims and their cooperation during the last Hajj season, and their dedication to their religious rituals, serenity and peace.

Rashidian expressed his thanks for the reception and hospitality, and expressed his best wishes for the success of the upcoming Hajj season, as was the case in previous years.