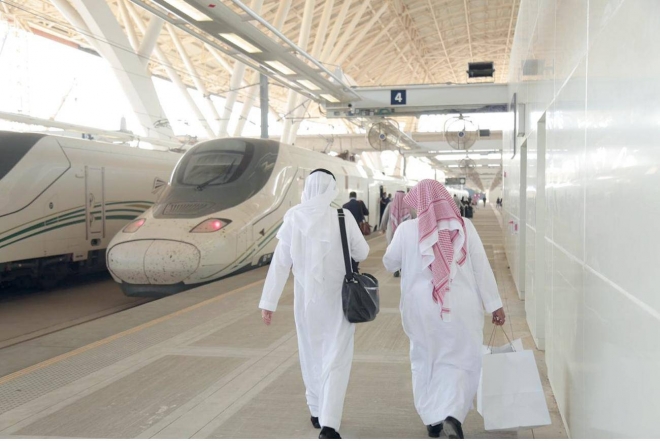 JEDDAH — The Haramain High Speed Train resumed on Wednesday its service between Jeddah and Madinah after a gap of nearly two and a half months.

This was for the first time, the train started operation from the railway station of the new terminal of King Abdulaziz International Airport (KAIA) after the main station in Sulaymaniyah district in Jeddah was rendered inoperative following a massive fire.

The station was engulfed in the fire that occurred on Sept. 29, forcing temporary suspension of service on the Makkah-Jeddah-Madinah route. The service between Makkah and Madinah via Jeddah and King Abdullah Economic City of Rabigh is expected to be operational next week.

A total of 300 passengers boarded the train that left the airport station for Madinah on Wednesday morning. Senior officials including Assistant CEO of the General Authority of Civil Aviation (GACA) Sulaiman Al-Bassam and Director General of KAIA Essam Nour were at the airport to see off the passengers.

There are five scheduled daily trips in each direction between Jeddah and Madinah and the travel will take 90 minutes at a speed of 300 km per hour. Ticket vending machines, electronic gates and flight schedule screens have been erected at the airport station.

The station at the new KAIA airport is a unique step taken by GACA in connecting its terminal 1 with the Haramain Train Network, as it constitutes a qualitative shift in public transport services at Saudi airports.

The station has a capacity to hold 3,204 passengers per hour, and it is instrumental in further smoothening the transportation of visitors and pilgrims to the Two Holy Mosques with ease and comfort.

Spread over on an area of 99,000 square meters, the 6-story station consists of commercial areas and waiting longue for first-class passengers.

It has the capacity for six trains at a time with a platform for trains with a length of 519 meters, and investment areas on an area covering 2,543 square meters.

There are 40 well-trained and qualified male and female Saudi staff working in the sections of tickets, baggage and guiding travelers at the station.