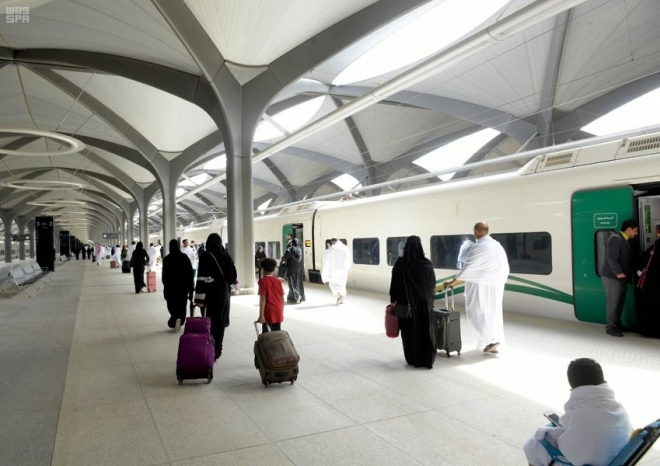 Saad Al-Shehri, director of the Haramain station in Madinah, said that at 8:10 a.m. on Wednesday a train departed for Makkah.

Al-Shehri explained that there will be 12 daily round trips between Madinah and Makkah, which will transport passengers on a regular schedule five days a week: Wednesday, Thursday, Friday, Saturday and Sunday.

The director pointed out that 5,000 passengers will be transported every day, with each journey transporting 417 passengers.

He referred to the possibility of increasing the number of daily journeys to transport visitors and citizens between the Two Holy Mosques and the Jeddah and Rabigh stations, stressing that the decision will only be made after the necessary studies are conducted in this regard.

During peak hours Haramain trains run every 10 minutes and the rail service has the capacity to carry 20 million passengers a year.

Last week, the high-speed rail service to Jeddah’s King Abdul Aziz International Airport (KAIA) resumed after a fire tore through one of its stations in Jeddah in September.

The General Authority of Civil Aviation (GACA), in cooperation with operators of the Haramain rail transport system, began running trains again between Makkah and Madinah through the King Abdullah Economic City (KAEC) in Rabigh. The station at the KAIA is connected to the airport’s Terminal 1.

Work is still underway to repair damage and restore operations at Al-Sulaymaniyah station in Jeddah following the huge blaze in September.

The new KAIA rail link is the first airport connection of its kind in the region and is aimed at easing the transfer of visitors and pilgrims to the Two Holy Mosques as part of the Kingdom’s Vision 2030 goal to be able to accommodate 30 million pilgrims by 2030.

KAIA Terminal 1 covers 810,000 square meters and consists of six floors, commercial areas, and a designated waiting lounge for those traveling VIP class. Its railway station has six 519-meter-long platforms, each capable of handling two trains with 832 passengers, and it can deal with approximately 3,204 travelers per hour.