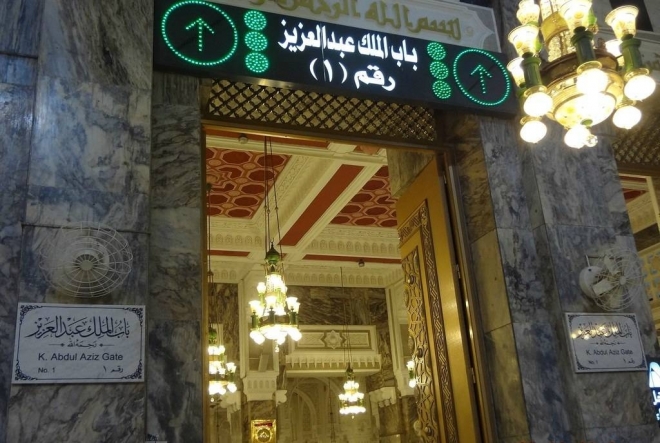 The General Presidency for the Affairs of the Two Holy Mosques has started writing the numbers of the gates of the Grand Mosques in illuminated colors to make it easy for the pilgrims and visitors to recognize them.

The numbers will be written in Arabic and English on the left and right side of each door in lighted colors.

The presidency started the new experiment on King Fahd gate No. 79 and it will be generalized on all other doors.

It said the new method of numbering is different from the old one in that the numbers are very clear and can be seen from a distance.

Chairman of the presidency, Sheikh Abdulrahman Al-Sudais, who recently launched this new method of door numbering, said the move was within the continued efforts to upgrade services in the Grand Mosque for the benefit of the pilgrims, visitors and worshipers.

Meanwhile, large number of visitors from various parts of the world, are availing their stay in Madinah to visit Quba mosque following the Prophet's Sunnah.

Prophet Muhammed (peace be upon him) used to visit Quba mosque every Saturday either on his camel or walking.

It was the first mosque in Islam for which the Prophet (pbuh) laid down its foundation stone when he first arrived in Madinah from Makkah. His companions had completed the construction of the mosque.

According to some Ahadith (sayings of the Prophet — pbuh), offering two rakaas (units) in Quba mosque is equivalent to performing Umrah (minor pilgrimage to Makkah).

The mosque is located on the Hijra road liking Makkah and Madinah and is 3.5 km away from the Prophet's Mosque.