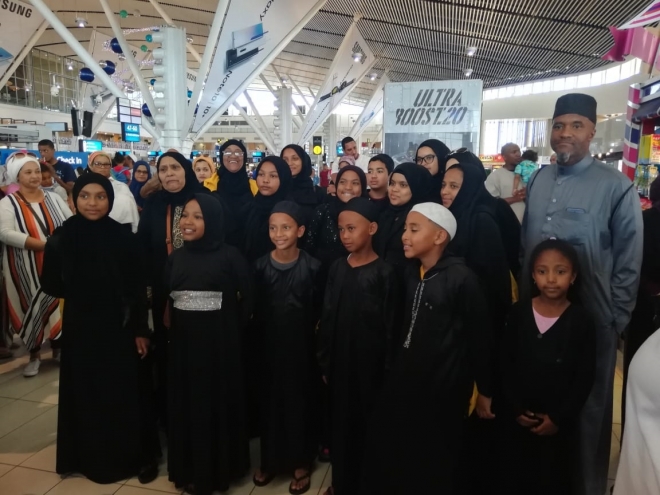 An early morning epiphany has prompted a madressa teacher to raise funds to take her class on a journey of a lifetime to Mecca.

That was nine months ago, and on Monday Faatimah Esau and 17 of her young students boarded a plane at the Cape Town International Airport to fly to Saudi Arabia where they will perform the umrah, or “little hajj”.

The 70-year-old muallimah (teacher) started Madressa tul Faatimah at her Mitchells Plain home in 1989, teaching generations of Muslims in Lentegeur, where she is known as “everyone’s mother”.

The Islamic teacher says in March she had a dream about taking her students, aged between nine and 18, to Mecca.

“It just came to me while I was sitting in bed after my Fajr prayers one morning,” she says.

“I booked a hall, called the parents and I told them what my aim was, and that is to take my students on umrah.

“The first thing they said was they don’t have money. I told them it’s something I want to do, and I wanted nothing from them.”

The teacher was determined “to complete her mission” and held several fundraisers.

“We hosted three high teas, I gave tickets [for the high tea] to the parents and out of each high tea each child made R5 000.

“By the third high tea, they had their money for their trip.

“The Almighty says, ‘make sure you leave a child behind that prays for you before you die’.

“I know these children will never forget me. When they think of Mecca and Medina, they will think of me.

“Just like these children, I have been invited to go on umrah by the Almighty, and it’s the greatest honour.”

Her neighbour and close friend of 40 years, Yasmine Mohamed, says muallimah has a heart of gold: “She has inspired so many people to go to Mecca.

“She’s been this way all the years. My son was in her madressa, today he’s a moulana in Bay View.

“We pray to Allah to grant muallimah Faatimah a long life because without her, Lentegeur won’t be the same.”

The group is expected to return on 6 January.