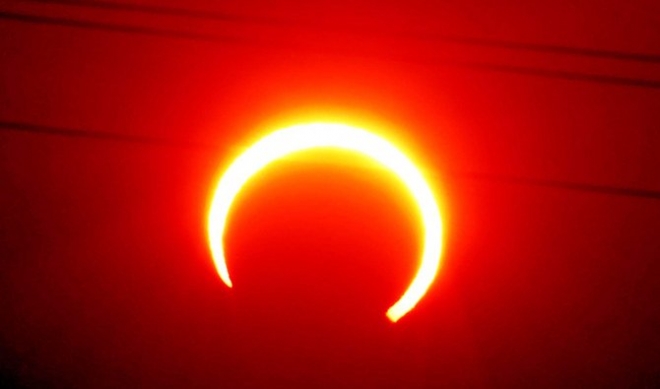 JEDDAH: Thousands of people across Saudi Arabia witnessed one of the world’s rarest astronomical events, a spectacular solar eclipse known as the “Ring of Fire,” on Thursday.

The annular eclipse — where the moon covers the center of the sun, giving the appearance of a bright ring — was visible in the early hours of the morning across the Kingdom, India and Southeast Asia.

In Al-Ahsa in the Eastern Province, families ventured into the desert to enjoy unrivalled views of the eclipse, an event that last occurred in the area more than 95 years ago.

Astrophotographers, astronomers and skywatchers watched as the moon made its transit across the sun’s surface.

Yousef Bajjash traveled to the Eastern Province to enjoy a once-in-a-lifetime experience. The Makkah photographer has seen two solar eclipses before, but planned his trip six weeks in advance in the hope of witnessing the “Ring of Fire” eclipse.

“Initially I was going to stay in Dhahran, but when I found out that Al-Ahsa was going to be a prime location for the eclipse, I knew exactly where I needed to be,” Bajjash said.

“The sun rose during the eclipse and the view was simply majestic. With a special lens to protect my camera, I was able to bear witness to one of the rarest occurrences ever in Saudi Arabia, and capture it with a view of some of the unique mountain ranges in Al-Ahsa. “The pictures were perfect,” he said.

Many of those watching the solar eclipse wore protective glasses, while others without the special eyewear improvised by taking photographs or videos of the eclipse with their backs to the sun.

Jawaher Abdullatif, 32, who commutes daily to her office 70 km north of Jeddah, was able to see the partial eclipse on her way to work.

“I heard about the eclipse and I could see the sky gradually darken. I don’t usually head out early to work, but I wanted to see if it was possible to view the eclipse during my drive,” she said.

“The sun was rising just above the Hijaz mountains to my right. I sneaked glimpses of the eclipse, but was careful not to look straight into the sun because of the warnings we received.

“But I got the chance to see the eclipse, a first for me,” Abdullatif said.

The next expected solar eclipse will occur almost a year from now on Dec. 14, 2020, and will be visible across parts of southern America, southwest Africa and northern parts of the Antarctic.