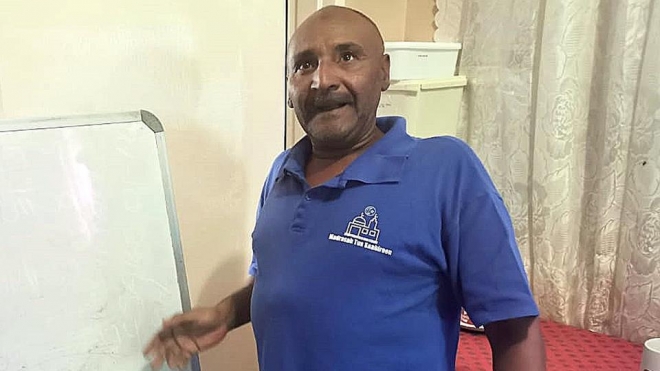 After 28 years, a madrassa teacher from Tafelsig will finally get his dream trip to Mecca this year.

After devoting his life to teaching young children in a klein kamertjie in his home, Muallim Abduraghmaan Ismail, 56, will be boarding a plane to Saudi Arabia in March, after he was selected by the South African Isamic Council of Madaaris to go on umrah.

As a young man, Boeta Ismail, who runs Madrassah Tus Saabirien in Lost City, started hosting classes in the bedroom of his Belgravia home in 1992.

Years later he was approached by a woman in Manenberg who asked him to give classes at her home.

“This is where I met my lovely wife Rasheeda and in 1998 we got married,” the teacher says.

Several years later the couple moved to Tafelsig where Boeta Ismail established Madrassah Tus Saabrien at his house, where he gives three classes every day to children up to 18, all free of charge.

“At night I have special classes for adults as I believe they also need teaching. Together they are 60 students every day.”

Moulana Sameeg Norodien of the SAICMl says when a donor sponsored the tickets, they awarded it to Boeta Ismail for his hard work.

“He won the madressa Teacher of the Year award in 2017 because of his dedication and he has been doing sterling work.

“Allah alone knows how he survives as he does this as a full-time job with no income but still he manages.

“He deserves this and will be going on umrah on 16 March.”

Boeta Ismail says he is very grateful and is now raising money to cover his vaccinations and spending money.