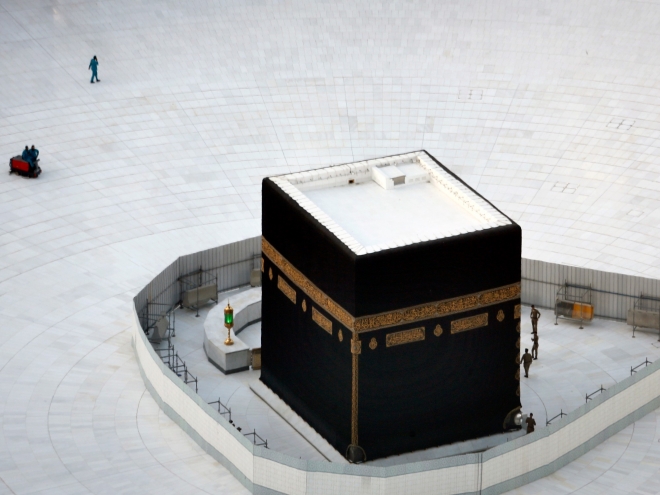 Saudi Arabia has halted all international travel into the country due to concerns over the spread of the coronavirus, which has meant that access to Muslim holy sites in the cities of Mecca and Medina has been limited.

About 12 million Muslims across the world make pilgrimages to Mecca every year and for Muslims in the United States, the travel restrictions have meant cancellations of trips that are extremely important to their faith.

According to the Qu’ran, all Muslims are supposed to participate in a journey to Mecca at least once in their lifetime at the end of the Islamic calendar year, called Hajj. Some also participate in Umrah, a pilgrimage that can be made at any time of year.

“The Umrah journey is a very spiritual journey, the Hajj as well. The way we talk about it is ‘I was invited to God’s house,’ or ‘I wasn’t this year,’” said Kamran Islam, an imam at the Tarbiya Institute in Sacramento. “And so the years where you feel like you wanted to but couldn’t can be really spiritually burdensome and devastating.”

Imam Kamran Islam said he was advising members of his mosque to cancel Hajj plans for this year, a discussion he said was a hard but necessary one.

“There have been historic cases in Muslim history where Umrahs or even Hajj has been postponed or delayed because of public health reasons, for the need to make sure people aren’t harmed by the journey or they don’t become ill,” Islam said. “From this, we try to advise the community that it’s ok that you don’t’ go this time around or that you delay, but like I said, there’s that spiritual connection and that emotional connection that people have to going and going this time and feeling like this is going to be their year.”

Adel Sayed of Los Angeles had been planning a pilgrimage for March but had his trip cancelled because of the travel ban.

“I’d planned this trip back in October of last year of 2019, and I came to find out, after all the things that were happening, that it would have to be cancelled,” Sayed said. “It not happening last minute was definitely a setback.”

He added that he was also concerned about the travel restrictions extending into July, when the highest number of Muslims travel to Mecca for the large, traditional pilgrimage called the Hajj. It’s still unclear as to how the coronavirus could affect travel during this time.

“People save up their entire lives to do the Hajj pilgrimage, the average packages is around $10,000 to $12,000 a person,” Sayed said. “To have folks change plans that have been planned literally years in advance, oftentimes lifetimes in advance to find the perfect time, there’s a lot at stake.”

Aneeq Waqar of Chicago had also been planning a pilgrimage for early March with his wife, but after hearing news about travel restrictions to Saudi Arabia, decided to pre-emptively cancel his trip. It would have been his first trip to Mecca.

“Obviously we were looking forward to the trip, but given the circumstances, we decided the best case scenario would be to delay it for now,” Waqar said. “Little info is known about the virus right now but it’s definitely spreading very quickly and everyone can play their own little part.”

And Gloria Wadud of Sacramento had been planning a hajj trip with her husband since last year. They have not yet cancelled their plans, and she said they were still holding out hope that the virus would be controlled by the summer.

“All praises to the God, my husband and I were able to save and able to afford it this year, so we got our Visas, got our passports, got a group that we’re going with,” Wadud said.

Historically, the spread of diseases like cholera, meningitis, or more recently, MERS have been exacerbated by people visiting Mecca for Hajj, due to the high number of people from many different countries being in close contact with each other, but the holy site has never been fully closed for Hajj.