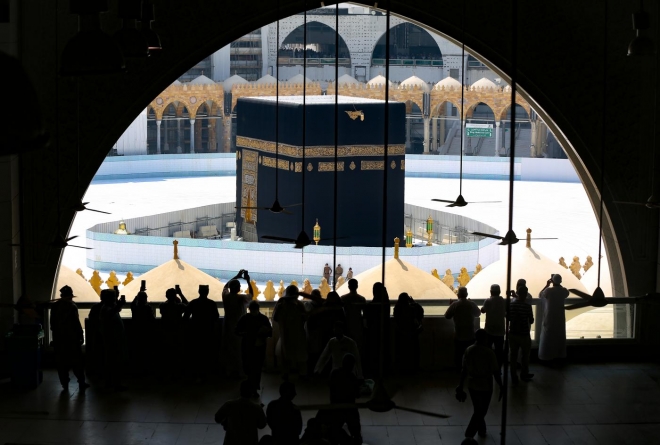 Palestinian travel agents in occupied East Jerusalem and the West Bank have lost millions of dollars after Saudi Arabia suspended Umrah pilgrimages in an attempt to contain the spread of the coronavirus, Middle East Eye has learned.

Now they fear that Hajj, set to take place in July, could be cancelled, compounding losses and stopping Palestinians from undertaking the pilgrimage expected of all Muslims once in their lifetimes.

Travel agents told MEE that Saudi Arabian Airlines informed them that no flights would run to Mecca and Medina until 15 April at least, after the kingdom last month barred all entry for pilgrims on Umrah.

The Saudi government suspended pilgrims' entry on 27 February, the same day around 2,500 Palestinians from East Jerusalem and the West Bank were set to travel to the kingdom from Amman on Umrah visas for a 12-day visit. The last batch of Palestinian pilgrims to enter the country was on 26 February.

'I don’t think there will be an Umrah season, and if there is, just a few numbers will travel because people are scared and panicking from coronavirus'

Travel agents had already paid for the visas for the hundreds of pilgrims set to fly to Saudi Arabia, and they estimate the Umrah suspension has lost them around 350,000 Jordanian dinars ($490,000). So far the Saudi authorities have made no suggestion that they would reimburse those out of pocket.

Ashraf Hamed, owner of a travel agency in Ramallah, told MEE that alongside the cost of flight tickets, hotel bookings, bus transportations and insurance, the total losses amount to millions of dollars.

“A group of four Umrah pilgrims cost me $7,000, and this is just an average cost,” Hamed said.

Jordan's decision on Tuesday to close its border with the West Bank and Israel to combat coronavirus has placed further doubts over plans for Umrah season and the holy month of Ramadan, which runs from around 23 April to 23 May. The Israeli military has locked down the West Bank, too.

“I don’t think there will be an Umrah season, and if there is, just a few numbers will travel because people are scared and panicking from coronavirus.”

Before visiting Saudi Arabia, pilgrims are required to provide certificates for vaccinations in their visa applications. No vaccine for the coronavirus has been developed yet.

Suspending Umrah is not the only measure the kingdom has taken to battle the coronavirus.

Earlier this month, Saudi Arabia temporarily closed Mecca's Grand Mosque, so no prayers could be conducted in Islam's holiest site. Though the mosque has partially reopened, worshippers are forbidden from touching the sacred Kabaa at its centre.

Meanwhile, flight and travel bans from dozens of countries have been put in place by authorities, the eastern Qatif province has been locked down, schools shut and cultural and sporting events cancelled.

Another travel agent in East Jerusalem, who wished to remain anonymous, told MEE that questions remain about the fate of this year's Hajj, one of the five pillars of Islam.

“The issue of Hajj was not discussed during talks with Hajj and Umrah officials in Saudi Arabia. No one would like to think that the Hajj will be cancelled because of the coronavirus epidemic,” he said.

Though Hajj has been cancelled several times over the centuries, since the Kingdom of Saudi Arabia's foundation in 1932 it has never missed a year.

Since the Kingdom of Saudi Arabia's founding in 1932, the annual Hajj pilgrimage has never missed a year, with hundreds of thousands heading to Mecca during the month of Dhul-Hijjah (Month of the Pilgrimage).

Historically, however, the pilgrimage expected of each Muslim in their lifetime has been cancelled around 40 times, mostly due to disease, conflicts and banditry.

Middle East Eye takes a look at a few of the most dramatic cancellations since the first Hajj of 629 CE.

During his conflict with the Abbasid Caliphate based in Baghdad, Ismail bin Yousef, known as Al-Safak, launched an attack on the holy Arafat Mountain overlooking Mecca in 865, massacring pilgrims there. The raid forced Hajj to be cancelled.

In AD 930, Abu Taher al-Janabi, the chief of the Qarmatians heterodox sect based in Bahrain, launched an attack on the holy city of Mecca.

Historical accounts say the Qarmatians killed 30,000 pilgrims in Mecca and dumped their bodies in the sacred Zamzam well. They also looted the Grand Mosque and stole the Black Stone from its Kaaba and took it to Bahrain.

The Hajj was suspended for a decade until the Black Stone was returned to Mecca.

The Qarmatians were an Ismaili Shia sect who believed in an egalitarian society and considered pilgrimage as a pagan ritual.

Not only conflicts and massacres have cancelled Hajj. A plague from India hit Mecca in 1831 and killed three-quarters of the pilgrims there, who had endured weeks of travel through dangerous and barren lands to perform Hajj.

Umrah can be performed at any time of the year, though the popular season for pilgrims begins two months before Ramadan and peaks during the holy month.

In 2017, Hajj and Umrah pilgrimages poured an estimated $12bn into Riyadh's coffers, contributing around seven percent of the kingdom's annual revenue. Saudi Arabia has in recent years been seeking to promote its tourism industry in an attempt to diversify from its reliance on oil revenue, which brought in around $171bn in 2017.

Saudi Arabia distributes Hajj visas to countries corresponding to the size of their Muslim population. Around 5,000 Palestinians from East Jerusalem, the Gaza Strip and the West Bank are allowed entry every year.

“At the start of April we should know the names of the pilgrims going to Hajj. But there are still fears that people will not travel because of coronavirus," Hamed said.

"We are not expecting Hajj's cancellation because people wait for it from year to year, and if it happened it will be a catastrophe.”

So far, there is no indication when Saudi Arabia will lift its travel bans and resume receiving Umrah pilgrims.