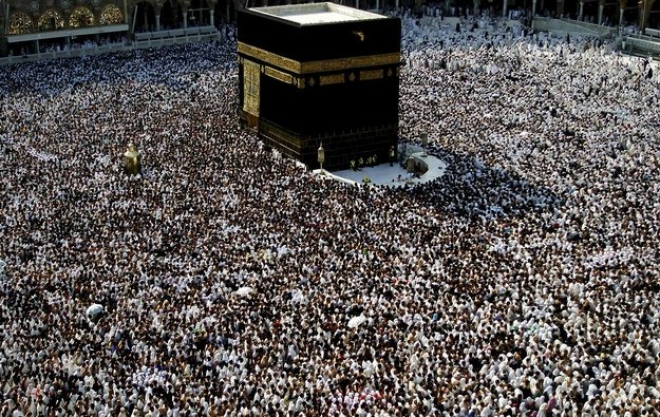 The novel coronavirus has pushed countries into lockdown, many of which have had to take extreme measures to contain, or at least try to restrict, the spread of the virus.

In the wake of the COVID-19 outbreak, Saudi Arabia enforced a lockdown and curfew in an attempt to flatten the curve of infections; it has also restricted entry into the holy cities of Mecca and Medina and has suspended the Umrah pilgrimage, the non-mandatory pilgrimage many Muslims perform throughout the year.

There have been talks that Saudi Arabia may cancel the mandatory annual pilgrimage, better known as Hajj. At the start of the month, Saudi Arabia asked Muslims who were planning to take part in the pilgrimage to delay bookings amid uncertainty.

"The kingdom of Saudi Arabia is prepared to secure the safety of all Muslims and nationals," the kingdom's Hajj and Umrah Minister, Muhammad Saleh bin Taher Banten, told state television on Wednesday. "That's why we have requested from all Muslims around the world to hold onto signing any agreements until we have a clear vision."

This comes as over 1,800 people in Saudi Arabia have tested positive for COVID-19, at the time of writing.

The potential cancelation of Hajj, which is set to take place on July 28 in 2020, would be a step in a responsible direction by Saudi Arabia. If the coronavirus outbreak continues to infect populations, the annual pilgrimage just cannot take place for various reasons. One such reason is the incredibly high risk of large gatherings of people, which lies at the heart of Hajj season and at the core of the contagion as well. But what would the cancelation of Hajj mean for Saudi Arabia's economy?

While the overwhelming majority of Saudi Arabia's wealth comes from its oil-heavy deposits, religious tourism plays a significant role in the nation's economy.

In 2017, around 2.4 million Muslims descended on Mecca to perform the annual pilgrimage, Hajj. Of these, some 1.8 million came from outside of Saudi Arabia. An estimated 2 million people were expected to travel to Mecca and Medina for the annual pilgrimage this year. The large swarms of people who visit Saudi Arabia to embrace their spirituality bring in billions of dollars to the kingdom's economy. So if it had to be canceled, Saudi Arabia's economy would witness a painful slap to the face.

Restaurants, travel agents, hotels, airlines, and mobile phone companies all benefit monetarily from pilgrims year-on-year. In fact, 25 to 30 percent of the private sector's income in the surrounding areas of Mecca and Medina rely heavily on the pilgrimage season.

It's no hidden mystery that Saudi Arabia relies heavily on oil revenues for a huge chunk of its budget (87 percent to be exact). However, there's also no denying that the oil-rich nation has been shifting gears to diversify its revenue streams in recent years. Religious tourism has always been one major contributor in this realm; leisure tourism had been turning into a contributor as well before COVID-19 pushed the progress off the rails.

According to TRT World, Hajj and Umrah pilgrimages add $12 billion to Saudi Arabia's GDP per year. That is about 7 percent of the country's total GDP.

"The hajj industry is probably one of Saudi Arabia's most valuable treasures due to the money it generates for Mecca and Medina, and the wider hajj logistical train," Theodore Karasik, a senior adviser to Gulf State Analytics, a Washington DC-based consultancy, once said.

According to numbers released by the national real estate committee at the Council of Saudi Chambers in 2018, both Hajj and Umrah pilgrimages were expected to generate $150 billion in income in Saudi Arabia over a period of five years.

The cancelation of the annual pilgrimage will hinder the progress Saudi Arabia has made in the tourism sector; it will also throw the kingdom's goals under the bus for a while.

One of the key goals under Saudi Arabia's ambitious Vision 2030 is to increase the number of tourists who visit the country and revenues generated from the sector to 18 percent in the next decade or so. But with all its operations - from religious tourism to leisure tourism - suspended, it seems as though that goal is not attainable at the moment. But certainly better safe than sorry.

Since the founding of Saudi Arabia in 1932, Hajj has never missed a year. So if it were to happen, it would be an incredibly rare occurrence in modern history as the last such closure is thought to have taken place more than 200 years ago.