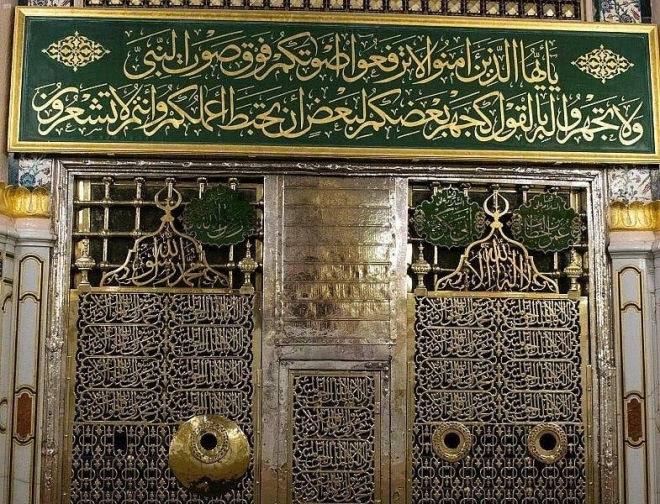 MADINAH — The “Sacred Chamber,” refers to the Prophet’s House, where he (peace be upon him) used to live with Aisha Bint Abibakr Al-Siddiq, the “Mother of the Believers” (May Allah be pleased with her). It is prominently located in the eastern part of the Prophet’s Mosque in Madinah.

According to a Saudi Press Agency report, the door of the Prophet’s House used to open toward the “Rawdah Al-Shareefah”. When the Prophet died in Aisha’s chamber, his companions deliberated about where he should be buried.

In this connection, Abubakr said he heard the Prophet say “Every prophet is buried where he died”, so the Prophet was buried in her chamber and his grave is located in the southern part of the ‘Sacred Chamber’.”

According to the website of the General Presidency for the Affairs of the Two Holy Mosques, there are sayings and quotes mentioning that the angels encircle the grave day and night, repeating the “salat alannabi”, as narrated by Al-Darimi and Al-Bayhaqiy.

On the “Sacred Chamber”, the Presidency said: “Aisha used to live in the northern part of the chamber. There was no barrier between Aisha’s chamber and the Prophet’s grave. When Abubakr died, she permitted that he be buried in the chamber and he was buried about one arm’s length behind the Prophet, his head a short distance from the Prophet’s shoulders. Aisha did not place a barrier between her and the two graves, saying: “They are my husband and my father.”

However, out of respect for Omar after his demise, Aisha put up a partition to separate the area where she lived from the graves because Omar was not a mahram.

The “Sacred Chamber” has undergone repairs and renovations many times. During a visit by Omar Bin Al-Khattab (May Allah be pleased with him) to the Prophet’s Mosque in 17H (638 AD), he replaced the fronds in the house with a wall.

During a visit by Al-Waleed Bin Abdulmalik during the period 88 – 91H, Omar Bin Abdulaziz rebuilt the chamber with black stones on the same area where it was located earlier. Then he built a five-sided wall around the chamber, in a way creating a triangle at the rear so as not to resemble to the Holy Kaaba.

Since the era of the late King Abdulaziz Bin Abdulrahman Al Saud until the era of Custodian of the Two Holy Mosques King Salman, the Kingdom has been giving all care and attention to the Sacred Chamber and the Green Dome at the Prophet’s Mosque.

The Kingdom has preserved the historic structure of the Prophet’s Mosque. It has also worked on supporting and renovating it, whenever there was need for that. The authorities in the Kingdom regularly inspect the Sacred Chamber and carry out its maintenance with all courteousness and respect.

They assign this task to the best person in terms of piety and integrity. They also take care of and paint the Green Dome every time the green color fades due to the harsh and arid climatic conditions.