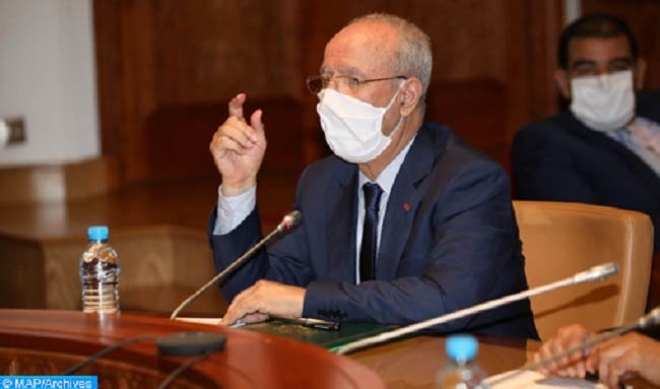 Rabat – Morocco will not announce its decision regarding this year’s Hajj pilgrimage until Saudi authorities officially communicate on the issue, Minister of Islamic Affairs Ahmed Taoufik announced on Monday, June 15.

There is currently no news about Hajj, Taoufik said during a plenary session at the House of Representatives.

The minister recalled that Saudi Arabia sent correspondence in March asking Muslim countries to wait before concluding contracts for accommodation, catering, and transport services with Saudi hotels and travel agencies.

However, since then, Saudi authorities have not made any announcements about Hajj and whether it will go ahead as usual despite the COVID-19 pandemic.

The Moroccan minister’s statement is similar to one he made on May 28, explaining that Morocco will wait for Saudi Arabia to make an official decision on Hajj before making its own.

“We can only take our own decision in light of the Saudi one,” he said during a parliamentary meeting.

“The case has been carefully studied and various scenarios are being considered. A formal decision will be taken within a week,” an official in the Saudi Ministry of Hajj and Umrah said, quoted by Financial Times.

The 2020 Hajj pilgrimage, scheduled for late July, would be exceptional if it goes ahead as the COVID-19 pandemic continues to spread in Saudi Arabia.

Saudi Arabia is the hardest-hit country in the Gulf, recording more than 132,000 COVID-19 cases, including over 1,000 deaths.

The Hajj season, which attracted nearly 2.5 million pilgrims from across the world in 2019, would represent a major health risk and could lead to an unprecedented spread of the pandemic if the government does not take sufficient preventive measures.

In late February, Saudi Arabia banned the Umrah pilgrimage, a pilgrimage Muslims can perform at any time of the year, to curb the spread of COVID-19. The ban will remain active until at least the end of June, as the holy city of Mecca remains under lockdown.

While Saudi authorities were quick to ban Umrah, they have delayed a decision concerning Hajj. Not only is Hajj one of the pillars of Islam with great importance for Muslims, but it is also a major source of revenue for Saudi Arabia.

Hajj generates approximately $8 billion for Saudi Arabia every year. The Saudi economy has already taken a hit because of the unprecedented drop in oil prices due to COVID-19.

Possible solutions to the Hajj dilemma, besides cancelling it altogether, might include reducing the number of pilgrims or banning people at high risk of a severe COVID-19 case, in addition to health monitoring, disinfection, and even quarantines.

While the majority of Muslim countries are still awaiting the Saudi decision before finalizing their own, some countries, such as Malaysia, Singapore, Cambodia, Thailand, and Brunei, have already announced they will not send any pilgrims this year.

In Morocco, 34,000 citizens have been selected to take part in the 2020 Hajj pilgrimage. The future pilgrims have already made payments to the Ministry of Islamic Affairs and to travel agencies for their trip, accommodation, and catering. However, uncertainty will continue to surround their Hajj plans until Moroccan authorities make a decision.