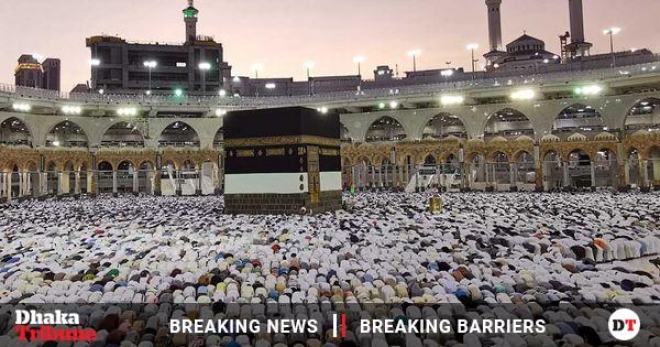 While several countries, including the world's largest Muslim country, have already declared their decision to skip this year's Hajj, Bangladesh is waiting for the decision of Saudi Arabia to make its own.

But, given the reality on the ground, it should be obvious that the Covid-19 pandemic is going to hinder a normal Hajj attended by millions of Muslims from across the world.

Subject to the appearance of the moon, this year's pilgrimage is supposed to begin in the evening of July 28 and end in the evening of August 2. Hajj is mandatory for every physically and financially capable Muslim, once in their life.

The news from Saudi Arabia clearly indicates that this year's Hajj is going to be observed in a symbolic manner. According to the international media and individuals familiar with the issue, the authorities in Riyadh are considering to hold this year's pilgrimage either by attendance of some people from within Saudi Arabia or inviting small delegations from different countries.

Matters are not improved by the fact that the number of coronavirus infections has been on the rise for quite a few days in the desert kingdom.

As of Wednesday, a total of 136,315 people were infected in Saudi Arabia and 1,052 persons had died. In terms of number of infections, the kingdom is now the 16th worst-hit in the world.

Considering the above-mentioned scenario, it would be prudent for the Bangladesh government to declare the cancellation of this year's Hajj, the world's largest congregation, without waiting for the Saudi decision, in order to remove the uncertainty among thousands of people.

Undoubtedly, those devoted Muslims who were longing for the pilgrimage will be disheartened by the decision. But, at least, they will know.

Even if the Saudis decide to go ahead with the Hajj, Bangladesh should not send pilgrims as it will create many problems. To avoid complications, the government should not send the pilgrims even if some of the allocated quota are offered to perform Hajj.

For instance, a family of four is selected. But, two of them, including the head of the family, are tested positive or have Covid-19 symptoms. What will happen then?

Another thing is very common for the pilgrims. Many catch cold in Saudi Arabia due to the fluctuation of temperature. What will happen if the adults catch cold while minors in the group stay well? How will this issue be addressed?

There will be likely many more unsolvable issues.

Therefore, the wisest course of action would be to skip this year's Hajj altogether and wait for the next season.

A well-known hadith also supports the skipping of the pilgrimage when a pandemic is ravaging the world:

"When you hear that a plague is in a land, do not enter it and if the plague breaks out in a place while you are in it, do not leave that place," said Prophet Muhammad (PBUH).


⇐ Previous:
Haj travel agents to lose over RM150m in business
Next: ⇒
Mayoralty to set up cultural center at Jabal Al-Nour base