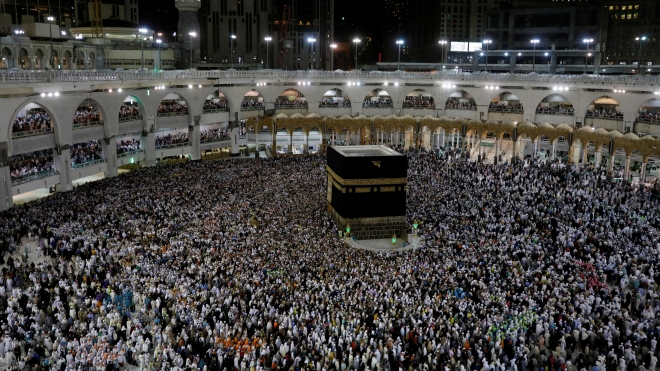 The annual hajj, an Islamic pilgrimage to the holy cities of Mecca and Medina in Saudi Arabia, is a humongous event which 2.5 million Muslims -- including 2 million flying in from around the world -- participate in.

While some pilgrims will be in opulent hotels next to the holy mosques, others will be staying in more crowded, less comfortable facilities, and all will be participating in densely packed religious rites. As Saudi Arabia passes 130,000 confirmed coronavirus cases, the risk of having so many people so close together is looking unacceptable.

That is why the Indonesian government's announcement that it has canceled its participation in hajj, where it was the largest overseas contingent, is a smart move for its citizens.

For Indonesia, the management of hajj, which is obligatory for all able-bodied Muslims who have the means, has never been easy, especially since the sheer number of pilgrims is daunting. Indonesia was going to send 220,000 this year.

The government closely monitors hajj to ensure that service providers from tour agencies, airline companies, hotels, local transportations and caterers are all lined up and properly render their services to the pilgrims to prevent them from being poorly treated.

Getting visas for so many pilgrims is the most difficult recurring problem to resolve, as it is beyond the domain of the Indonesian government and within the scope of the Saudi authorities, which serve as "the Custodian of the Two Holy Cities."

But it was the COVID-19 pandemic which was the final straw. Indonesia has had nearly 40,000 confirmed cases of COVID-19 and over 2,000 deaths and does not wish its pilgrims to catch it there and import cases.

There are at least three COVID-related reasons why the suspension of hajj is good for Indonesia, Saudi Arabia and the pilgrims themselves, which have to do with the complexity of applying physical distancing policies.

First, physical distancing will be almost impossible to impose during the series of hajj rituals, with millions of pilgrims converging at one place during one particular period. This will hold true for the daily congregational prayers, where space will not allow distancing between one pilgrim and the next, both inside and outside the mosques.

Most problematic will be tawaf, when pilgrims walk around the Kaaba, the black rectangular stone in Mecca, which all Muslims around the world direct their prayers to. Here, pilgrims will be going around the Kaaba shoulder to shoulder, unavoidably touching one another.

While engaging in tawaf and sa'i, where pilgrims run between the two hills of Safa and Marwah, near the Kaaba, they will normally cry out Islamic religious chants, which would most likely cause droplets to spread among the pilgrims. Wuquf, or the standing vigil held in a place called Arafah, a blistering desert about 20 kilometers from Mecca, is another potential venue for spreading COVID-19.

Second, hajj is essentially the coming together of the faithful from different races, ethnicities, nationalities and socioeconomic statuses. It is a place of gathering for Muslims to converge as one people without discrimination before the eyes of Allah. Therefore, new friendships, companionships and kinships among pilgrims will be born throughout their interaction and engagement during the hajj season.

There is very little chance that pilgrims will not be shaking hands, hugging or kissing the cheeks of their fellow pilgrims, consistent with the customs and traditions of Muslims around the world, notably throughout the Middle East. No policy or government advisory could easily break such long-held customs and traditions.

Third, hotels are usually overbooked, especially in the vicinity of the two holy cities, and some pilgrims will be answering the call to hajj on a small budget. These rather unfortunate pilgrims will gather in restaurants, storefronts and on the streets under the stars. They will congregate and look out for each other's belongings, making physical distancing incredibly difficult.

There is absolutely no way that physical distancing can be applied in hajj, and once cases of COVID-19 are found in the hajj season, one cannot imagine how contact tracing could ever be done.

Saudi Arabia, which had expected to make $12 billion from hajj and umrah, a lesser pilgrimage, is considering canceling the whole event, according to news reports, putting millions of pilgrims in limbo. But in the current circumstances, it would probably be the right thing to do.