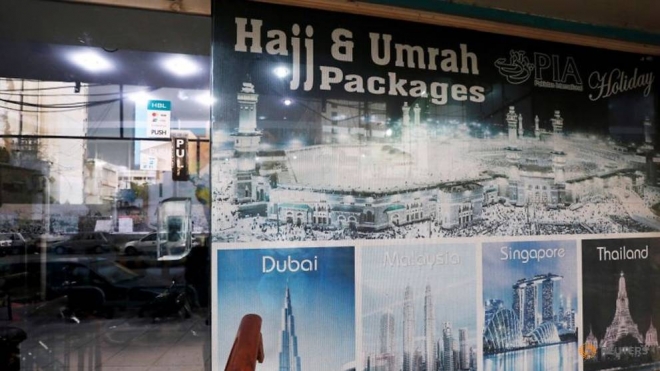 KARACHI: Koran tutor Muhammad Asim should have been packing to leave his Karachi home for Mecca next week to perform one of the most sacred, once-in-a-lifetime obligations for Muslims, the Haj pilgrimage. But that was before COVID-19 hit.

Asim, 30, is one of 2.5 million Muslims globally, almost 180,000 from Pakistan, whose plans were upended when Saudi Arabia restricted this year's event to only 1,000 local residents, savaging Pakistan's 160 billion rupee (US$999.6 million) Haj industry.

Indonesia and Pakistan, the largest Muslim-majority countries by population, send the most pilgrims.

"I prayed for the chance to go on Haj and Allah answered my prayers,” Asim, selected from tens of thousands of applicants for a government-supported package, told Reuters. "But then he sent this coronavirus."

Asim borrowed money to come up with the nearly US$3,000 cost.

More than 900 Pakistan tour operators and travel agencies are licensed to arrange travel over the Haj. This year will be the first in modern times that pilgrims from abroad will not be allowed into Mecca.

“The biggest effect right now is on our business,” Zaeen Siddiqui, senior vice-chairman of the Haj Organisers' Association of Pakistan, told Reuters.

“Our money is stuck in airlines. Our offices are closing because we cannot keep workers."

According to Pakistan's Ministry of Religious Affairs and Interfaith Harmony, which oversees Haj arrangements, 179,210 Pakistanis had already registered to attend this year - 71,684 through private tour operators and 107,526 through cheaper, government-supported packages.

Pilgrims buying private packages spend US$4,000 to US$6,000 on the journey, Siddiqui said. Those using government packages deposit around US$3,000 into state accounts, money which authorities began returning last month.

But local operators are able to charge premiums thanks to the high demand - premiums that keep their businesses going for the rest of the year.

A shopkeeper sits amid items which are sold during the annual Haj pilgrimage season in Karachi, Pakistan, Jul 7, 2020. (Photo: Reuters/Akhtar Soomro)

Low-end tours involve basic accommodation in tents, while high-end packages come complete with personal guidance and sermons from scholars and televangelists to small groups of pilgrims who stay at luxury hotels in Mecca.

Before the Haj setback, Pakistan's tour operators were already reeling from the suspension of year-round pilgrimages to Mecca and Medina from abroad known as the umrah, also because of the coronavirus.

Pakistan International Airlines has lost 12 billion rupees (US$72.37 million) in revenue because of the cancellation of the Haj after losing nearly as much because of the umrah ban, a company official told Reuters.

A man fills a bottle with oil perfume along a wholesale market in Karachi, Pakistan, Jul 7, 2020. (Photo: Reuters/Akhtar Soomro)

Faraz Masood, 34, was planning to fly to Mecca from Karachi with his wife. They put down a 20 per cent deposit on the US$12,000 package.

“When this coronavirus was just getting started, we were in touch with the company, and they kept saying 'dont worry, things will be back to normal in time for Haj',” he told Reuters.

Masood is still trying to get his money back.