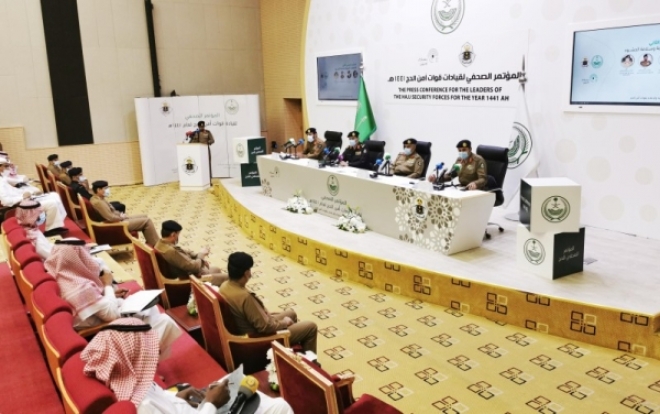 MAKKAH — Maj. Gen. Eid Al-Otaibi, commander of the tasks of the Makkah region police, said that all the arrangements have been made to prevent the infiltration of pilgrims without Hajj permits to the holy sites. “Strict security measures and plans for the annual pilgrimage of Hajj have been put in place to ensure the pilgrims performing their rituals safely and comfortably in the wake of the outbreak of the coronavirus pandemic. There will be a fool-proof security cordon to prevent any infiltration into Makkah and the holy sites,” he said.

Al-Otaibi said this on Monday in the second press conference of the commanders of the Hajj Security Forces at the headquarters of the Uniform Security Operations Center (911) in Makkah to brief on the traffic and crowd control plans for ensuring a pandemic free Hajj. “A security cordon is in force on desert roads surrounding Makkah and the holy sites, and continuous security patrols are being conducted on the main roads leading to Makkah to monitor violators and apply punitive measures against them. There will also be fixed and mobile security control centers in selected sites,” he said. Al-Otaibi stated that there is a secret security monitoring system covering all rest houses, mountains and valleys to prevent infiltration into the holy sites.

For his part, Assistant Commander of the Hajj Security Forces for Security Patrols Maj. Gen. Abdul Aziz Al-Masaad said that there will be four security commands for the smooth operation of Hajj and these include Makkah patrols command and the Central Haram Region (Markaziya) command. They will carry out both vehicle and foot patrols in all the roads and neighborhoods in Makkah throughout the Hajj season.

Assistant Commander of the Hajj Security Forces for Traffic Affairs Maj. Gen. Muhammad Al-Bassami said that the traffic plan for the Hajj season focuses on the deployment of traffic patrol teams in Makkah, the holy sites and the roads linking them to achieve a flexible and safe traffic movement for pilgrims and all road users.