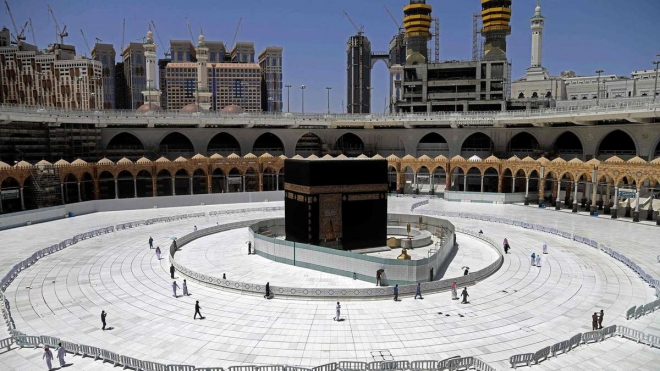 All over the world Muslims are preparing for next week's festival of Eid Al Adha. The Islamic holiday will coincide with the Hajj pilgrimage, which is bound to be very different this year.

The most important thing the Saudi authorities have done is to find a way to keep Hajj going. If it had been cancelled altogether, hundreds of pilgrims who had planned to go, and millions of Muslims who follow the rites through television and live feeds, would have felt an existential loss.

The Saudi authorities have prioritised the health of the Ummah, or the Muslim community. This time around only 1000 people, who already live in Saudi Arabia, will take part. Thirty per cent of these will be Saudi nationals, including health workers and military personnel selected as a way to honour their service during the pandemic.

The remaining 70 per cent will be foreign nationals from as many as 160 countries who live in Saudi Arabia and who represent a microcosm of the diversity of pilgrims who each year make their way for Hajj and who – during peak Hajj – can number 3 million.

As I have written earlier in these pages, just as the pandemic has reignited debates around race, equality, representation and justice, several businesses and brands too have been discussing how to be more authentic and socially responsible. This discussion could extend to the experience of Hajj, which is about discovering your self, while bringing together people irrespective of race, gender or privilege.

Ornaments for sacrificial animals on sale at a roadside ahead of the Muslim festival of Eid Al Adha in Peshawar, Pakistan, July 23. Bilawal Arbab/ EPA

This diversity is important to the symbolism and sanctity of Hajj as a grassroots event where wealth and privilege are irrelevant. Hajj can be the lighthouse global event for these issues. This will not be easy as the sensitivity and emotion that surrounds the pilgrimage can make it difficult to openly and constructively discuss the challenges. This year’s minimalist Hajj, however, could prompt discussions about the kind of issues the global community of pilgrims needs addressed.

Overcrowding is at the top of the list. Perhaps seeing this year’s numbers will lead to a re-evaluation of who gets to go, especially among those who visit every year.

The impact of Hajj on the environment is another issue to consider. Flights, air-conditioning and lighting in large buildings and food waste all leave a footprint. Seeing spaces afresh in the post-pandemic world can perhaps nudge the conversation towards not only preserving the environment but also taking better care of historical monuments. After all, Hajj rituals at their core are about a retelling of history.

Makkah has also always been a centre of trade. The exchange of goods and ideas has been at its heart from the beginning. While pilgrims bring in revenue to the Kingdom through the Hajj and Umrah pilgrimages, Saudi Arabia also spends lavishly to ensure pilgrims' security and comfort.

Witnessing only a fraction of the usual number of pilgrims focused on the spiritual experience, should be a chance to rethink how these two different experiences can have their own place – with the religious aspect being unarguably at the centre.

These discussions could go a long way to tackle the perceived disparity in the experiences of pilgrims. It will always be the case, not just in pilgrimages, that affluence will buy a more comfortable experience. The way pilgrims have been selected this year could perhaps encourage thinking about how disparities in the future can be reduced.

Now might also be the time to consider consequences of overcrowding. Along with female pilgrims, the elderly and disabled face challenges. This year's requirement to maintain social distancing – and the respect inherent in doing so – can be the turning point to re-establish a community-minded ethos in pilgrim interactions.

To an extent, technology can help with some of these issues. It may be unimaginable for prayer to go completely virtual but this year's restrictions have opened up such possibilities, as we saw with Ramadan prayers and virtual iftars.

While a physical pilgrimage can perhaps never be conducted entirely via Zoom, there is the exciting prospect that virtual and augmented-reality Hajj will become regular features of the Muslim way of life.

Rightly so, Hajj is always spoken of in reverent terms, a “once-in-a-lifetime” event. That will be more true than ever this year. And what better time to seize the moment and address the challenges so we can reinforce the divine nature of the Hajj experience for all pilgrims.


⇐ Previous:
Afghans missing out on Hajj focus on helping poor at home
Next: ⇒
Memories of Egypt’s kiswa