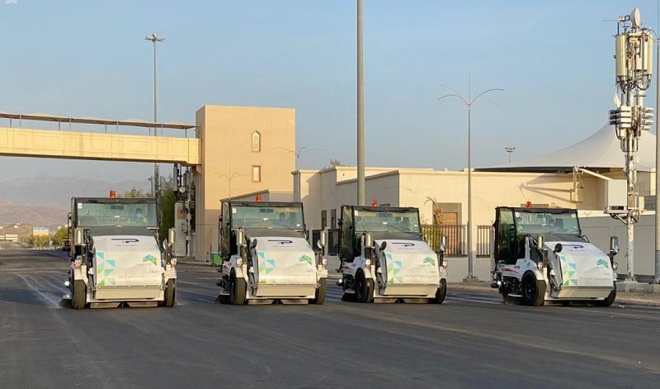 Makkah Municipality announced the readiness of its operational plan for this year’s Hajj in line with precautionary measures to protect pilgrims from contracting COVID-19.

The municipality has recruited over 18,490 workers to implement its plan for the Hajj season this year to provide the best services to the pilgrims.

There are 28 new and fully equipped service centers spread across the holy sites in addition to sub-municipalities.

More than 13,500 cleaners with the latest equipment will work for 24 hours across the city and holy sites, particularly in crowded places and on peak days. There are 87,900 compact garbage containers placed underground in the Mina area.

There will be a number of teams and committees to monitor markets, food stores, and restaurants around the clock.

These teams will test food on an ongoing basis and destroy damaged materials, manage prices, supervise water sanitization, and monitor slaughterhouses as they have the highest operational capacities during the season.

They will carry out field tours to detect any epidemic cases between animals and to ensure the safety of meat provided to people.

Makkah Municipality will also increase its supervision and maintenance work on electricity networks, roads, tunnels, bridges, toilets, and torrent drainage networks in addition to allocating an emergency unit and support teams to deal with situations such as fire and heavy rain.

More than 13,500 cleaners with the latest equipment will work for 24 hours across the city and holy sites, particularly in crowded places and on peak days.

Makkah Mayor Mohammed Abdullah Al-Quwaihis said that the plan was based on Saudi Arabia’s decision to limit this year’s Hajj to people already living in the Kingdom.

He said that the municipality had mobilized its energy, human and material resources to achieve a successful and safe Hajj season, with support from teams in other sectors and municipalities, as well as from public security and scout groups.

Al-Quwaihis added that the municipality was doing its best to ensure the provision of all services for pilgrims so they could perform their Hajj rituals in ease, comfort, and safety under the follow-up and guidance of Makkah Gov. Prince Khaled Al-Faisal, his deputy Prince Badr bin Sultan bin Abdul Aziz, and the minister of municipal and rural affairs, Majid Al-Hogail.

The General Directorate of Civil Defense has started an awareness campaign to educate pilgrims and workers on ways to stay safe in case of an emergency.

Messages are delivered to pilgrims through SMS as well as guide boards, screens, and televisions across holy sites and inside pilgrim accommodation.


⇐ Previous:
Grand Mosque readies for Hajj with intensified disinfection and sterilization
Next: ⇒
Minimalist Hajj this year will truly be a once-in-a-lifetime pilgrimage