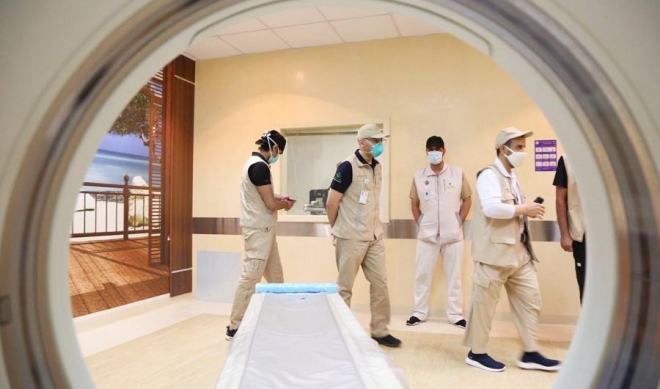 Field hospitals, medical staff and clinics are set up and ready at the holy sites ahead of the 2020 Hajj pilgrimage.

The Ministry of Health’s Hajj plan to ensure the health and safety of pilgrims attending this year’s annual pilgrimage include a hospital in Mina, six ambulances, three clinics at pilgrim accommodations, a field hospital and a mobile hospital as well as a clinic in Arafat.

Medical and technical cadres are also preparing to ensure the safety of visitors while performing their pilgrimage, intensifying preparations to deal with heat-related ailments such as heat strokes. Misting systems are distributed in all holy sites and have been proven to decrease temperatures, lowering the chances of pilgrims suffering heat stroke.
Pilgrims arriving at hotels in Makkah received a special kit provided by the Ministry of Hajj and Umrah. It contained a face mask, Hajj ihram garments, a prayer rug, ritual stones and hygiene items such as shaving instruments, personal-care tools and a guidebook for the pilgrimage.

According to Major General Mohammed bin Wasl Al-Ahmadi, assistant commander of the Hajj Security Forces for the Grand Mosque and its premises Security, the Hajj security plan is based on four pillars: Organization, security, humanitarianism and health care.

The Hajj security plan is based on four pillars: Organization, security, humanitarianism and health care.

The Hajj Security Forces had put in place a mechanism for entrance and exit from and to the Grand Mosque during the pilgrimage, he said. A passage for pilgrims extended from the southern and western premises of the mosque, as well as special passages around the circumambulation and Saee areas.

Meanwhile, more than three million polymerase chain reaction (PCR) tests have been conducted in the Kingdom to detect infected residents.

Saudi Arabia’s Ministry of Health announced on Sunday that 57,216 PCR tests had been conducted in the past 24 hours, raising the number of tests conducted in the Kingdom so far to 3,056,956.

A total of 1,968 newly confirmed cases were conducted on Sunday, raising the number of confirmed cases in the Kingdom to 266,941. There are currently 43,885 active cases, 2,120 of whom are in critical care units. No new patients have been reportedly admitted to ICUs in the past 24 hours.

Al-Hofuf recorded the highest number with 208 confirmed cases, followed by Taif with 195 and Riyadh with 126.

A total of 2,541 new recoveries were reported, raising the number of recoveries in Saudi Arabia to 220,323, and the Kingdom’s recovery rate to 82.5 percent.

Thirty new deaths were recorded, raising the number of fatalities to 2,733.


⇐ Previous:
Saudi rulers have development of holy sites close to their heart
Next: ⇒
Grand Mosque readies for Hajj with intensified disinfection and sterilization