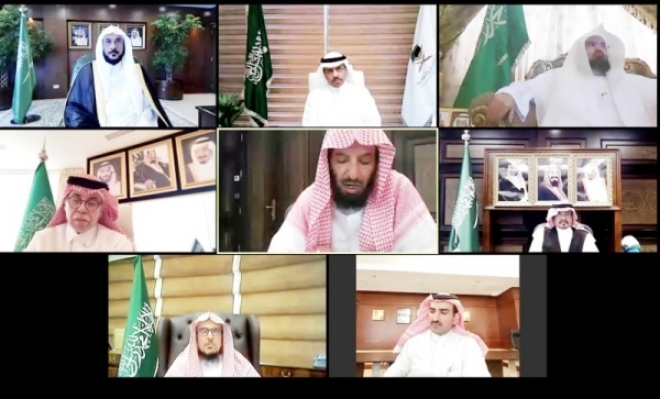 Saudi Arabia's Minister of Hajj and Umrah Dr. Muhammad Saleh Benten inaugurated on Monday 45th annual Hajj Symposium titled "Public health rules and their scientific applications in the light of prophetic guidance and practices." The symposium started with the recitation of verses from the Holy Quran.

The event, which was held online for the first time due to the outbreak of the coronavirus was attended by distinguished ministers, religious scholars, top doctors and consultants, jurists and legal scholars.

The symposium is a cultural and scientific meeting held annually in the holy city of Makkah during the Hajj season.

University professors, researchers, scholars, intellectuals, thinkers and writers from across the Islamic world took part in the. Attendees included prominent professors such as Dr. Shaker Mousa, Professor of Pharmacology at Albany College of Pharmacy and Health Sciences and chairman and executive vice president of Pharmaceutical Research Institute; and Prof. Nor Hayati Othman, a faculty member of Universiti Sains Malaysia, Pathology Department.

The opening session held under the title 'From Hajj to the World' was chaired by the Minister of Hajj and Umrah.

At the outset of the session, Dr. Benten delivered a speech in which he praised Allah Almighty for gracing the Kingdom with the honor of serving the Two Holy Mosques, Islam and Muslims.

"From the era of late King Abdulaziz until the era of Custodian of the Two Holy Mosques King Salman Crown Prince Muhammad Bin Salman, Saudi Arabia has always played a pioneering role in spreading Islam and serving Muslims," Benten said, adding that despite the spread of coronavirus (COVID-19), the Kingdom was keen on allowing pilgrims to perform Hajj rituals in safe, health and security conditions.

Minister of Islamic Affairs, Call and Guidance Sheikh Dr. Abdullatif Bin Abdulaziz Al Al-Sheikh pointed out that Saudi kings took upon themselves to preserve the security, health, and safety of pilgrims

Al Al-Sheikh pointed out that the exceptional and careful organization of the Hajj season this year is aimed at preserving the pilgrims' health and safety. He said that the efforts of the relevant authorities of the government have joined hands to prepare to serve the pilgrims, saying that and the Ministry of Islamic Affairs, Call and Guidance was among those honored by serving pilgrims.

Adviser at the Royal Court and a member of the Council of Senior Scholars Sheikh Dr. Saad Bin Nasser Al-Shathri recalled that in addition to performing Hajj, a pilgrim could learn a number of lessons during his/her Hajj journey, citing lectures, speeches and sermons usually given at the premises of the Two Holy Mosques, other mosques and in on media platforms.

Tackling the issue of health of pilgrims, the Saudi government and relevant authorities took into account setting health foundations and creating conditions in order to preserve the health of pilgrims and work on everything that would remove the causes of diseases, he said, noting the decision to allow limited numbers to perform Hajj this year due to COVID-19, a pandemic the entire world is experiencing and suffering from. He described the decision as wise and achieves the purposes of Islamic Shariah in preserving religion, performing rituals, and saving lives at the same time.

He stressed the importance of following preventive and precautionary measures imposed by the authorities for the safety of pilgrims and visitors of the sacred places.

In this regard, he cited a number of measures, including that everyone should not expose himself to disease, avoid pollutants, including polluted running water and everything that is detrimental to health, follow moderation in all matters, and pay attention to medicine, and mental health.

Acting Minister of Media Majid Al-Qasabi delivered a speech in which he indicated that the title of the symposium is referred to the media and its various outlets to carry Hajj messages that contribute to achieving more integration, brotherhood, and acquaintance among members of the Islamic nation.

He said that Hajj season this year is experienced in exceptional circumstances due to CODID-19 pandemic, citing that Saudi Arabia is keen to hold Hajj even in a very limited number of pilgrims from various nationalities who already reside in the Kingdom in order to ensure holding the ritual, a pillar of the religion, anyway, but in a safe and healthy manner.

Deputy Minister of Hajj and Umrah Dr. Abdulfattah Bin Sulaiman Mashat said that the Ministry was always keen on holding this symposium in this sacred place preceding Hajj major rituals every year as an international scholarly platform that attracts scholars and thinkers from every country to promote scholarly and cultural communication between the Kingdom of Saudi Arabia and the Islamic world.

He pointed out that the government of the Custodian of the Two Holy Mosques was keen to overcome all difficulties and provide all services to the pilgrims.

The deputy minister of Hajj announced the end of the opening session. A number of sessions will be held over the coming days, he concluded.


⇐ Previous:
One crew with a hundred and one stories to tell, Hajj unites all
Next: ⇒
'Hajj is the best birthday gift for me'