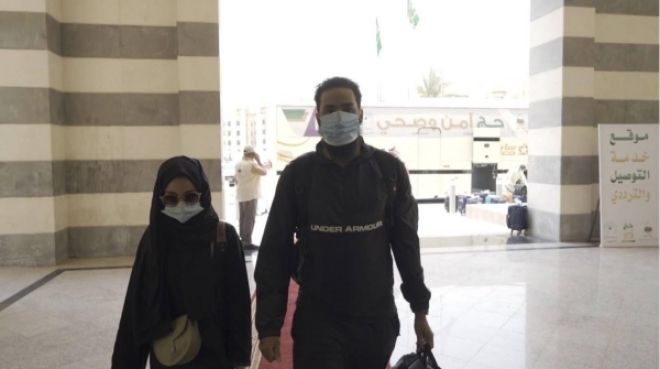 MAKKAH — Muhammad and Hiba got off the bus, hand in hand, just as they were less than a year ago in a similar circumstance on their wedding night.

In a joyous mood on an entirely different occasion, they boarded the bus from Jeddah to Makkah and arrived at the Four Points Hotel, the accommodation for the pilgrims in the holy city. The Eritrean couple, who were born and brought up in the Kingdom, are performing Hajj for the first time this year.

“I never planned for this,” said Muhammad and added: “I was following what was going on, and when the registration for Hajj opened, I said to myself: “Why not?”

Muhammad, an engineer working with an IT company in Riyadh, continued: “I did not expect that I would get a chance to perform Hajj as the number of pilgrims who were allowed to perform the ritual was limited. However, when the announcement was made, it was incredible that my wife and I found a place on the list.”

At the lobby of the hotel, Muhammad walks a little and gets his temperature checked before his wife, and after then, he refers to his wife, the companion of the journey, who in turn expressed her joy: “We are performing the first pilgrimage in the first year of our marriage as if it is a gift for our partnership. I feel extremely delighted and I can’t find words to express my feelings,” she remarked.

Heba added: “My parents were very happy for getting me this blessed opportunity to perform Hajj for the first time. I didn’t tell them about applying as I might not be getting the opportunity and informed them only when we were chosen for the annual pilgrimage.”

The couple also excited over the fast pace of the very systematic procedures. “Everything was much easier for us as it did not take more than 10 minutes to get off the bus and come inside the hotel elevator after completing all the routine procedures.”

The Ministry of Hajj and Umrah had begun to receive pilgrims, including citizens and expatriates, at the hotel on Dhul Hijjah 4 where they stayed until Dhul Hijjah 8, when they moved to Mina to embark on the lifetime journey.