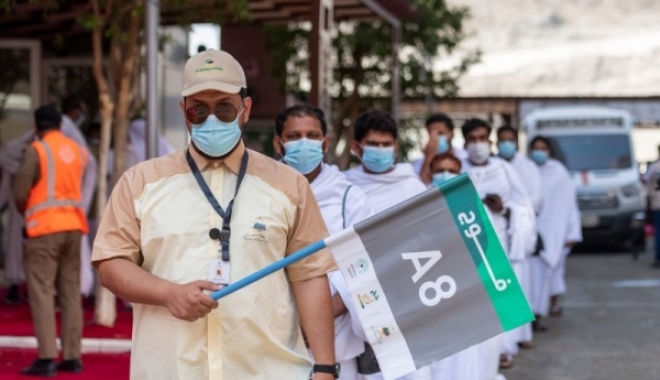 ARAFAT — In an ambience of spirituality, pilgrims ascended on Thursday the vast plains of Arafat, about 15 km east of Makkah, at the climax of this year’s annual pilgrimage of Hajj. Chanting “Labbaik Allahumma Labbaik (O God, here I am answering Your call)...,” they flocked this morning to Namirah Mosque in Arafat, after spending a night of meditation and introspection in the Tent City of Mina.

Amid precautionary measures and preventive protocols against coronavirus, pilgrims moved to Arafat in peace and tranquility while maintaining social distance to ensure their safety as well as the safety of those who are engaged in serving them. The pilgrims took their places in the 110,000 square meter mosque with keeping social distancing and wearing masks.

Sheikh Abdullah Bin Suleiman Al-Manea, a member of the Council of Senior Scholars and adviser at the Royal Court, delivered the Arafat sermon. He then led the prayers at the grand Namirah Mosque.

Retracting the noble tradition of Prophet Muhammad (peace be upon him), who said “Hajj is Arafat”, pilgrims performed noon (Dhuhr) and evening (Asr) prayers, shortened and joined together, at the time of Dhuhr with one adhan and two iqamas. Then, they started performing the Standing (wuqoof) at Arafat, the most important pillar of Hajj.

They were immersed in prayers seeking forgiveness and mercy of Almighty Allah as well as supplicating for the global peace and welfare of the Muslim Ummah and the entire humanity, especially beseeching God to save the world from the impacts of the pandemic.

In his sermon, Sheikh Al-Manea urged the pilgrims to be pious and fear God in all walks of their life. Referring to the pandemic situation, he emphasized that adversities are the best time for the faithful to be closer to God with showing patience and increase their virtues.

He said that life in this world does not remain free of difficulties and that adversities lead the faithful to remember the multitude of goodness and blessings that Allah has bestowed them. While reminding the faithful to seize the pandemic period to recognize God’s limitless abilities and bounties, and return to Him with humility, penitence, and hope.

“Adversities of this world serve as a test for people and allow those who persevere to be distinguished from those who are impatient. Adversities remind human beings about the hereafter and prompt them to prepare for the abode of Paradise where they witness no adversities or sorrows.”

Sheikh Al-Manea also underscored that Islam’s teachings seek to ensure people’s health and physical wellbeing. Citing the Tradition of the Prophet (PBUH) that prohibits traveling from one place to another during times of epidemic, he said the government of Saudi Arabia decided accordingly to limit the number of people performing Hajj this year with choosing citizens as well as expatriates representing a wide array of nationalities. “This shows that Hajj has to be performed even in adverse conditions with taking all necessary measures for protecting people’s health and maintaining social distancing,” he added.

The Presidency for the Affairs of the Two Holy Mosques made arrangements to translate the sermon into 10 languages such as English, Malay, Urdu, Persian, French, Chinese, Turkish, Russian, Hausa and Bengali. The standing at Arafat, one of the four pillars of Hajj, begins afternoon prayers.

Pilgrims were set to engage in prayers and supplication until after sunset. The Prophet said about the Arafat day: “There is no day on which Allah frees more people from the Hell than the Day of Arafat. After sunset, the pilgrims will march toward Muzdalifah Valley and spend the night there in prayers after performing Maghreb and Isha prayers combined.

Muslims across the world observed fasting on Thursday in a sign of solidarity with the pilgrims. It is a great Sunnah for those who do not perform Hajj to observe fasting on Arafat day.

Earlier in the day, the Ministry of Hajj and Umrah, in cooperation with the concerned authorities, has supervised the movement of pilgrims from Mina to Arafat, thanks to the integrated services and human resources being provided by the government of Custodian of the Two Holy Mosques King Salman and Crown Prince Muhammad Bin Salman to enable the pilgrims to perform their Hajj rituals in a safe, comfortable and secure manner.

The Ministry of Health has completed its preparations to provide medical care for pilgrims in Arafat. Assistant Minister of Health and the Ministry Spokesman Dr. Muhammad Al-Abdel Ali said that all pilgrims are safe and no Covid-19 cases were reported among any one of the pilgrims. The ministry has also prepared an integrated camp in Arafat to isolate suspected cases of coronavirus and implement the preventive precautionary measures.

Health facilities in Mount Arafat have been equipped with general clinics staffed with family physicians and internal consultants, in addition to specialized nursing staff. They are also equipped to deal with sunstroke and heat stress cases, in addition to cardiopulmonary resuscitation and intensive care units. There is also a mobile hospital in Arafat and mobile clinics in Muzdalifah to serve pilgrims until their departure from the two holy sites.

Abdel Ali said the ministry has mobilized as many as 8,000 men, including health practitioners and supporting staffers to serve the Hajj pilgrims. The ministry has readied six hospitals, including a mobile hospital, and 51 health clinics to provide healthcare for the pilgrims in Makkah and the holy sites. There are 62 field teams to conduct health checkups, follow-up and preventive medical supervision around the clock, and 200 ambulances were made available.

Lt. Col. Talal Al-Shalhoub, a spokesperson of the Ministry of Interior, confirmed the completion of implementing security forces’ mission to facilitate the movement of pilgrims between the holy sites. “The transportation to the holy sites is carried out by using buses according to a special system that achieves all health precautionary measures for the protection from coronavirus,” he said.

The ministry has recruited a number of its female staff to serve the women pilgrims at Namira Mosque and Al-Mashar Al-Haram Mosque. Their duties include monitoring, following up on the work of cleaning carpets and surfaces, as well as the role of security guards in organizing the entry of pilgrims through designated doors, and applying social distancing.