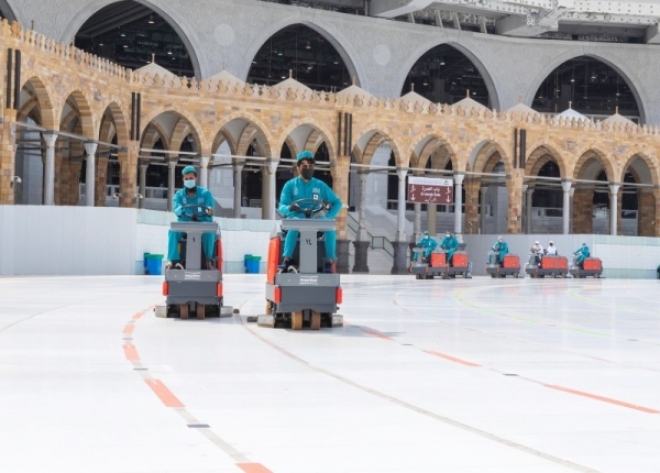 MAKKAH — Approximately 2,400 liters of sanitizers are being used daily to clean and disinfect the Grand Mosque during this year’s Hajj season as part of precautionary measures to curb the spread of coronavirus, the Saudi Press Agency reported on Saturday citing officials.

Out of the total 2,400 liters, around 1,500 liters of sanitizers are being used for surfaces and the remaining 900 liters as manual sterilizers, in addition to more than 1,050 liters of luxurious perfumes meant for the carpets and prayer rugs.

The extraordinary sanitization drive is being carried by the General Presidency for the Affairs of the Two Holy Mosques as it has intensified its efforts to ensure the utmost safety of the guests of God and its staff.

As part of the drive, the Grand Mosque and its premises were completely cleaned and sterilized, which included mataf (area for circumambulation around the Holy Kaaba), mas’a (area for the ritual of sai between Safa and Marwah), and outer courtyards after the pilgrims’ performance of Tawaful Ifadah and sa’i, two of the four pillars of Hajj, on Friday.

The presidency, represented by the general department for technical and service affairs and the department of cleaning, has mobilized more than 3,500 male and female workers to clean and sterilize the entire premises of the holy mosque at least 10 times on a daily basis.

They use the best quality of environment-friendly cleaning, disinfection, and sterilization materials and air fresheners especially brought for the Grand Mosque. Approximately 54,000 liters of disinfectants were used by 95 modern cleaning and washing equipment.


⇐ Previous:
Saudi Arabia provides Hajj pilgrims with ‘smart’ cards for their safety and security
Next: ⇒
‘The beginning of the rest of my life’